The knockdowns at the hands of Errol Spence or the split-decision loss years ago to Nicola Stevanovic do not add up to the pain and anguish Chris van Heerden endured during the last couple days of 2018.

Daniel Van Heerden, his father and best friend, was shot and killed in Meyerton, a suburb of Johannesburg, South Africa.

The news hit van Heerden hard, just five weeks after signing a promotional deal with Top Rank, fulfilling a dream since he was six years old. Rather than bask in that, van Heerden flew to South Africa to bury his father.

He continues to greave, but van Heerden is moving forward with his career.

“My father would want me to push forward,” said van Heerden. “Stopping is not an option.” 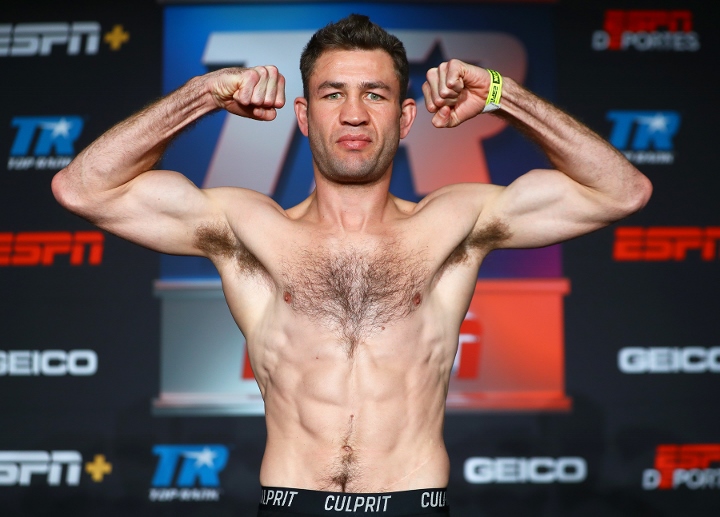 The fringe welterweight contender returns to the ring tonight in a 10-round bout against Mexico’s Mahrony Montes at The Hangar in Costa Mesa, California. The fight will stream live on ESPN+ (6:30 p.m. ET/ 3:30 p.m. PT).

The 31-year-old van Heerden will be fighting for the first time since winning by unanimous decision over Germany’s Timo Schwarzkopf on Apr. 27. The fight was the opening round of the Jose Sulaiman World Invitational welterweight tournament, which was cancelled this past fall by Real Deal Boxing, the promoter behind the tournament.

Van Heerden has had to battle promotional issues that have kept him from fighting often, especially over the last three years. He has fought in Las Vegas, Hollywood, California, and in Toronto, where he suffered his second pro loss at the hands of Errol Spence in September of 2015.

With the Top Rank deal in place, van Heerden is eager to fight often.

“I’m just excited to be back in the ring,” van Heerden told The Ring over the phone on Thursday. “It’s been 11 months. I was disappointed the WBC welterweight tournament collapsed. The winner was promised a No. 5 ranking and I really believed I would have won the tournament. I’m a man of faith and things happen for a reason. One door closed and another opened with Top Rank. I’m positive and excited to move forward.”

Tonight will also mark another first for van Heerden. He has been working under the tutelage of former world titleholder Brian Viloria.

The move comes after van Heerden first worked with trainer Freddie Roach after moving to the United States in late 2013.

“Months ago, Brian was in the gym training and he was helping me,” said van Heerden, who is also known for sparring MMA fighter Conor McGregor in 2017. “I have such a comfort zone with him. I love Freddie, but he wanted me to be more of a fighter where Brian is having me work on movement and feet, which are my strengths. We work well and we are both comfortable with each other.”

As much as van Heerden has found a comfort zone with Viloria, he longs for that comfort knowing he could speak to his father over the phone.

The elder van Heerden, the father of 13 children, was shot in the back after a traffic dispute with a security officer, who is black. The suspect was arrested, but was released pending an upcoming trial.

van Heerden misses the daily conversations with his father over the phone, but wants to use his platform with Top Rank and on social media for a greater cause.

“I miss my father everyday. My Dad and I were the best of buddies. I was very close to my Dad. People have told me that I should mourn. Even though it’s been three months, I still feel connected to me Dad because me signing with Top Rank was a dream for him as well.”

“My Dad’s life was taken by another senseless act of violence. I want to be the voice of change for South Africa. I want to push for peace and love in the country. I’ve received lots of support from people there, both from blacks and whites. I love all people and I just want to call attention to what is happening in South Africa.”

A victory could put van Heerden back in the world rankings by the sanctioning bodies. Van Heerden believes he can compete with any of the top welterweights in the division.

Van Heerden claims not to be the fighter who fought Spence, stating he was dealing with personal issues leading up to the fight. Now managed by Peter Kahn, van Heerden is ready to write another chapter to his career.

“I know what it takes to be in the top 5-10 in the division. I need to be active. The tournament did not work out, and if I’m busy, I know I can deliver. I believe with two or three solid wins, I can fight against another top-10 fighter or in an elimination fight.”

“The time I saw Manny Pacquiao fight on my Dad’s television in his bedroom at age 18 made me believe I could do that. I want to accomplish that dream I set out to be a world champion and honor my Dad. He believed in me and I know I can do it.”

[QUOTE=kavi521;19610502]Good luck Chris, the first man to school Mcgregor in a boxing ring...[/QUOTE] You know I almost forgot about that. Too right he did. If ever there was a gauge in how McGregor’s (formidable for Mma no doubt) boxing skills…

Good luck Chris, the first man to school Mcgregor in a boxing ring...

I have had the pleasure to speak to Chris before. He is an amazing young man with the most engaging personality. He is a legitimate good man. Though he and I have different religions I can’t help but respect his…