Chris Jenkins (22-3-3, 8 KOs) says he would gladly give Liam Taylor (22-1-1, 10 KOs) a rematch for the British and Commonwealth welterweight titles following their technical draw in Birmingham on Saturday night.

Jenkins v Tayor, which opened up the televised portion of the promotion, was shaping up to be a memorable one with the challenger dropping the champion in the second which was followed up by some action-packed exchanges and saw Jenkins warming to the task in the third and fourth rounds. But with just four seconds to go in the fourth an accidental clash of heads caused by Taylor cut Jenkins over the left eye. The fight was waved off by referee Steve Gray following advice from the ringside physician. Jenkins is no stranger to cuts in his career but the Welshman was a frustrated man when he spoke to Boxing Scene on Sunday.

“I just want to keep momentum going. There’s nothing I can do really. I was deflated last night but I’m still a champion. I’d fight him again no problem. He should have a rematch. There’s no excuses from my end. I started slow but I’m not a four round or a six round fighter, I’m a twelve round fighter.” 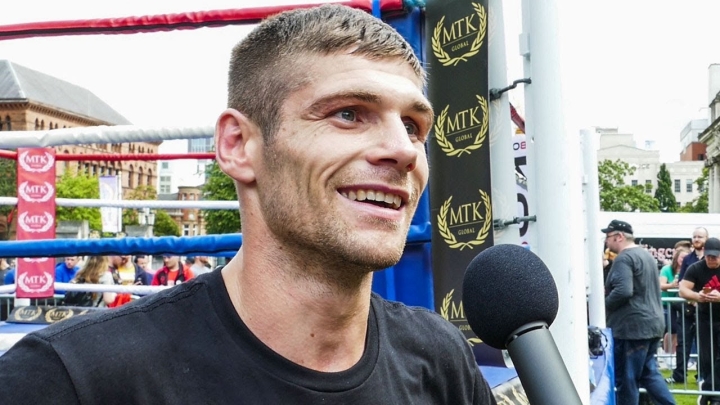 It was the second defence of his British title that he won against Johnny Garton and the first of his Commonwealth which he gained after defeating Paddy Gallagher via technical decision, following a cut to his left eye, back in August. The latest laceration for Jenkins has resulted in twenty-four stitches overall. Twelve internal and twelve external. The thirty-one year old told ‘Scene he hopes to be back in the ring by the middle to end of March 2020.

Jenkins looked back on the fight and admitted he started slowly against his twenty-eight year old opponent and said he expected his challenger to have quicker feet.

“I think he won the first round. Considering he hit me in the back of the head in the second, which had my feet were all over the shop, I thought I had done wicked that round, especially letting my shots go. The third round and fourth I got back to boxing and definitely won those. I think he was gassed to be honest with you.

Jenkins agreed the fight was developing into a bit of a thriller but says his fitness would have been key had the fight went on beyond the fourth round.

“It was a good scrap wasn’t it. Round two I went back to my corner and Gary got me boxing like I did in the third and fourth. First round, I don’t know, I just wasn’t myself. I was warming up into it. A slow start. The second round I got put… well not on my ass.... but on my knee, and he caught me on the back of the head. So I thought right, let’s go! I was letting them go and I was loving life again and I was like, come on then! I could hear Gary barking in the corner, “Chris, get out. You’re not going to win this round!” I had in my head there’s no-one fitter in this ring tonight than me. I can make him punch and punch and punch, trade with him and he’s going to be knackered in the third and fourth and that’s exactly what happened.”

Stitches, a technical draw, a frustrated champion but the bright side of life remains for Jenkins.