NEW YORK – Matt Korobov got off to a strong start Saturday night against Chris Eubank Jr.

About 20 seconds into the second round, Korobov suffered an injury to his left shoulder that prevented him from continuing in their 12-round, 160-pound title fight at Barclays Center in Brooklyn. Once Korobov determined he couldn’t continue, referee Steve Willis declared Eubank the winner by technical knockout on the Jermall Charlo-Dennis Hogan undercard.

Willis stopped their fight 34 seconds into the second round. Korobov didn’t do anything noticeable to injure his shoulder, but he grabbed it and walked away from Eubank after throwing a punch near the middle of the ring. 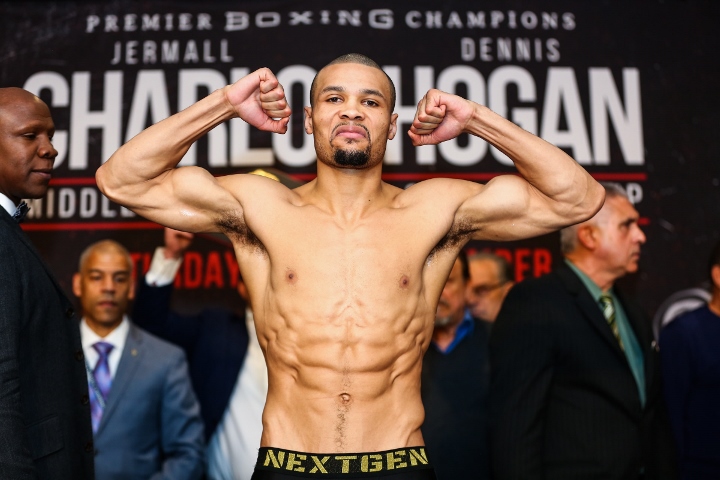 The 30-year-old Eubank (29-2, 22 KOs) won the WBA’s interim middleweight title, but this obviously wasn’t what the brash Brit had in mind for his debut in the United States. He had hoped to build on the momentum of the most meaningful win of his career in his last fight, a 12-round, unanimous-decision defeat of former IBF super middleweight champ James DeGale on February 23 at O2 Arena in London.

The Russian southpaw settled for a 10-round majority draw in his last fight against Immanuwel Aleem. Korobov was announced as the winner of that May 11 bout in Fairfax, Virginia, but the decision was quickly changed to a majority draw due to a mathematical mistake by one of the judges.

In his previous bout, Korobov gave Charlo perhaps the most difficult fight of the Houston native’s career. Korobov took that fight on less than one week’s notice, but he was very competitive in losing a 12-round unanimous decision last December 22 at Barclays Center.

On Saturday night, Korobov connected with a straight left hand that knocked Eubank backward 1:05 into the first round. A combination by Korobov also landed in the final minute of the opening round, which at least indicated he’d give the favored Eubank some trouble.

[QUOTE=P4Pdunny;20242831]can always trust this place for a needless comment from an insignificant person..[/QUOTE] How long you been knowing that

[QUOTE=Kcvtr81;20240072]So is the English language apparently[/QUOTE] can always trust this place for a needless comment from an insignificant person..

Just because Korobov was landing some punches in rd 1 dont mean Sht.

Korobov needs to hang em up. He has shtty luck and is getting old and injury prone. I think Eubank is being underestimated a little bit. I wasnt a fan at first but his stamina, workrate, and chin are really…

Korobov always does well early so its not that suprising, stil those were some flush left hands