Chris Colbert’s ring outfit paid homage to Hall of Fame football legend Deion Sanders, but the “Prime Time” moniker was all his own once the bell sounded.

The unbeaten Brooklyn native continues to plead his case for Prospect of the Year, his latest entrant also entering the Knockout of the Year sweepstakes with a one-punch 1st round knockout of Mexico’s Miguel Beltran Jr.

A right hand shot put Beltran Jr. down and out at 2:57 of round one in their PBC on FS1-televised chief support Saturday evening at Rabobank Arena in Bakersfield, Calif. 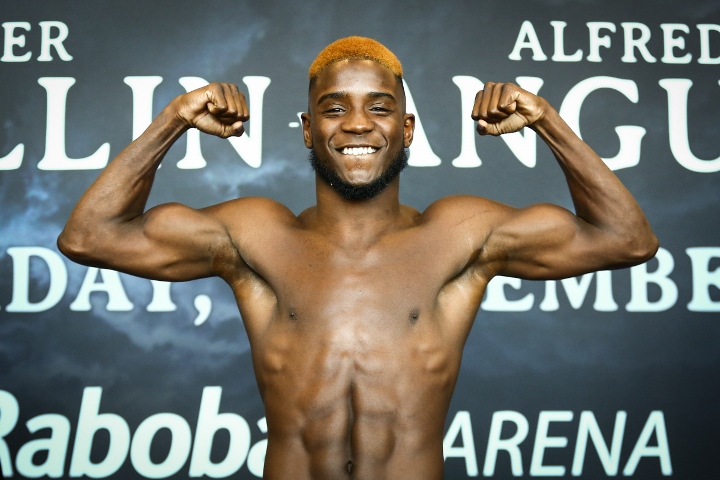 Colbert was all flash making his way to the ring, the charismatic prospect—who turns 23 later this month—sporting a head-to-toe tribute to Sanders, even sporting his old Atlanta Falcons jersey and with a“Prime Time” headband serving dual purpose as the two share the nickname.

The rising super featherweight prospect once again proved he was ready for primetime, overwhelming Beltran Jr. from the moment the opening bell sounded. The normally modest-hitting boxer kept keeping the veteran Mexican contender in front of his jab and desired punching range, with most of the action taking place in the center of the ring.

It’s also where the night ended.

With time winding down to end the round, Colbert decided he didn’t need to fight any longer. A perfectly placed right hand shot caught Beltran on the sweet spot, right behind the ear. The 30-year old was sent crashing in a heap as he was face down on the canvas for more than a minute.

No count was necessary as the bout was waved off immediately. Beltran Jr. (33-8, 22KOs)—a former title challenger—was down on the canvas for several minutes as ringside officials raced to the ring for observation.

Colbert racks up his fourth win of a breakout 2019 campaign, improving—in every sense of the word—to 13-0 (5KOs). The win is the quickest of his young career, having twice before ended bouts in the 2nd round including a five-minute thrashing of Mario Briones this past April.

The bout served as the chief support to a super middleweight battle between former middleweight titlist Peter Quillin and veteran contender Alfredo Angulo.

Colbert should fight Gervonta next...

Chris Colbert is a MF Problem! Brooklyn, y'all did it again! [B]SAVAGE![/B]

Lets not get crazy, in the last 7 years Miguel Beltran Jr. lost 50% of his fights.

4 fights this year, well done. And booming face first knockout, glad to see the other bloke finally got up. Speed kills and this lad has fast hands and an even flashier style.