Chris Colbert: I Knew I Was Going To Dominate The Corrales Fight

"He is a great fighter," said Colbert. "People don't realize that, because he had a bad decision against Ladarius Miller. But he's a great fighter. He's very awkward. He's slick and fast. It was hard to catch him because he was running, but he came to fight. I take my hat off to him."

The action began tactically, with Colbert trying to figure out the awkward style of the veteran former champion Corrales. Colbert switched from orthodox to southpaw and was able to control the early action despite a slow pace.

"I did my job in there," said Corrales. "My strategy was to hit and not get hit. I felt like I made him struggle for a lot of the fight. The knockdown wasn't from being hurt, it was my balance. Our feet got tangled and I lost my balance. I came in here to win. We both did our jobs, but the judges scored his pushing more than his punching." 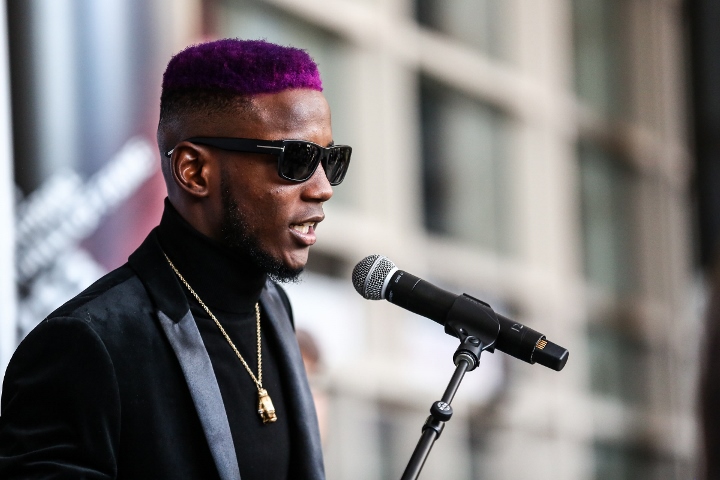 Colbert continued to vary up his attack as the fight went on, while Corrales was able to have some success in the middle rounds landing straight lefts to counter his attacking opponent. In round 10 Colbert began to pull away, landing a clean left hook followed by a right hook to the top of the head that put Corrales on a knee.

"I had confidence coming into the fight," said Colbert. "I knew I was going to dominate the fight and I told you all that before the fight happened. He was running and I was trying to catch him, so I told my corner, let's have a dog fight. We got 12 rounds. I'm in shape. You see, I didn't sit down one round. I'm in shape and I came to fight. I wasn't going to leave without this title.

The 23-year-old from Brooklyn seemed to get stronger as the fight went on and finished the championship rounds impressively, staggering Corrales in the waning moments of the fight to punctuate the performance. Colbert was the victor on all three judges' cards, by scores of 117-110 twice and 116-111.

"The strategy was to use my jab like I did and try to set up my punches," said Colbert. "But he's very awkward and has good distance. Slowly but surely I decided to stop boxing, close the distance and get on him. I knew he couldn't out throw me, I'm from Brooklyn."

GRJ, this is the opportunity to enter the Jr. Lightweight division! [B]MAN UP![/B] Colbert vs. Velez at the Barclay's! Would be a great co-main for Spence vs. DSG!

Corrales’s strategy wasn’t ‘hit & don’t get hit’. His strategy was, ‘don’t get hit and make him miss more than I do.’ In other words just run, hold, and play defense the whole night then hope the judges or fans…

wasnt really a domination until Jeezrel faded late in the fight.

I can't see Colbert as a future great. He looks rather inconsistent to me.

ADD COMMENT VIEW COMMENTS (4)
Advertisement
Top Headlines Mike Tyson: Fury Getting Up Was Like Rocky, Made Me a Fan Caleb Plant Not Keen On Short-Notice Fight Versus Canelo Perrella on TKO Loss: I Won Every Round - It's Like Chavez-Taylor Rau'Shee Warren: Felt Good To Be Back, I Want To Return in May Abel Ramos Stops Perrella With 1 Second Left in Fight Dubois: Joe Joyce Will Retire, This Will Be His Last Career Fight! Caleb Plant: I Want David Benavidez, I'm Tired of Waiting! Ryan Garcia: I Look Like A F--kin' Beast At 21 Years Old! Caleb Plant Batters, Dominates Feigenbutz in TKO Win Jordan Gill Back, Has Return Set For March 28 In London Dorticos Expects a "Classic" Battle With Mairis Briedis in Riga News: Kash Ali, Alex Dilmaghani, Brad Foster, Chamberlain, More Mike Tyson Reacts To Wilder's Prediction of Beating Him Kell Brook: I'd Be 100% in Errol Spence Rematch - I'd Beat Him Benavidez Warns Plant: Easy To Look Good Against a Bum! Elwin Soto Destroys Javier Rendon in The First Round Hearn: Pressure on Joshua To KO Pulev - They Will Trade Punches Caleb Plant Beats Down Overmatched Feigenbutz, TKO in Ten Caleb Plant vs. Vincent Feigenbutz - LIVE BoxingScene Scorecard Abel Ramos Scores Dramatic Stoppage of Bryant Perrella Diego Magadeleno Drops, Shocks Austin Dulay For Decision Win Plant: Not Here To Be Nice To Feigenbutz, Here To Knock Him Out Rau'Shee Warren Returns, Decisions Gabriel Mendoza Over Ten Ramos: Perrella's Trash Talk Is As Basic As The Way He Fights Feigenbutz: I Will KO Plant For My Nashville Fans Since He Doesn't Have Any Of His Own Dulay Embraces Hometown Edge For Crossroads Bout With Magdaleno Caleb Plant vs. Vincent Feigenbutz - LIVE Results From Nashville Benavidez: Feigenbutz Not Good At All; How Many Tune-Ups Does Plant Get? Caleb Plant: I'm Sharper Now Than I Was For Uzcategui, Lee Adrian Montoya Returns To Action in Tijuana, Mexico Feigenbutz: Caleb Plant Is Strongest World Champion At 168 Ryan Garcia: I'm Going To Beat Linares, Beat Davis, Beat Haney! Vergil Ortiz vs. Vargas, Pablo Cesar Cano vs. Perez on March 28 Plant: Of Course Benavidez Will Be Watching, He's My Biggest Fan Perrella: Abel Won't Be Able To Do a Damn Thing With Me, Ain't Ready For This Spaghetti Caleb Plant: Me Versus Canelo Would Be A Great Fight! Benavidez: I Don't Like Plant; Sense Fear When I See Him In Person Deontay Wilder: I Will Reopen That Cut On Tyson Fury's Eye Daily Bread Mailbag: Wilder-Fury Rematch, Davison, Gary Russell Caleb and Jordan Plant: The Continued Rise of Boxing's Power Couple
Advertisement
Latest Boxing Videos Jorge Linares Breaks Down KO Win Over Morales Ryan Garcia Talks Big KO Win, Responds To Haney Hopkins, Devin Haney Exchange Words Over Garcia Claressa Shields Talks Andrade, Taylor-Serrano, More Joseph Diaz Reflects on Win Over Tevin Farmer Bernard Hopkins Talks Canelo vs. Andrade, Saunders Hearn Talks Joshua, Andrade Win, Jarrell Miller, More Jeison Rosario Breaks Down TKO of Julian Williams Tyson Fury Vows To Take Down Deontay Wilder Deontay Wilder Talks Fury Rematch, Training, More
Recent Top Stories Foreman Ranks Wilder-Fury in Top Three Rematches of All Time Arum: We Just Want Good Judges For Fury-Wilder; British Judge Not Necessary Caleb Plant and a Super Middleweight In Between Georgia's Boxing Resurgence Continues on Campus
Advertisement
Latest Forum Threads
Advertisement
Advertisement
This website may contain adult language.
TM & © 2020 BoxingScene. All Rights Reserved.