Becoming the heavyweight champion of the world is one of the sporting realm’s crowning achievements. Society at large has long considered holding that title one of the most impressive claims a man can make, often referring to the claimant as the Baddest Man On The Planet, the man who could, in the words of John L. Sullivan “lick any son of a bitch in the house.”

It would seem antithetical then that someone who had climbed to those heights would have any regrets about getting there. But the paths boxers take to the top are often more traumatic than we realize.

Such is the case of Chris Byrd, perhaps the sport’s most unlikely heavyweight champion, and the one who never wanted to be in the division in the first place.

“The thing is, after the Olympics, I didn't get signed by nobody. I won a silver medal. I'm still, to this day, hurt by it,” said Byrd, tearing up. ”I had to go to heavyweight. I didn't want to fight at heavyweight, but nobody wanted me, so I was like damn, what do I do?”

“When I fought at heavyweight, it was so scary, I took it so seriously. I took it so seriously that it was almost like a joke. I used to stay up all night before fights like oh my goodness, tomorrow I have to be in front of David Tua, did you see him at the weigh in? But I had to do it for my family.  Depression. That's why I fought at heavyweight. Straight depression.”

Byrd achieved a level of notoriety that comes with holding a heavyweight title, but never the level of popularity one might expect. Given his stature, Byrd was forced to use his dynamic boxing skills to defensively frustrate opponents and score with accurate shots. He was branded as boring, as a skittish runner, and as a man who couldn’t punch, rather than as a smaller man standing up to and miraculously defeating giants.

Last week, a shirtless Byrd appeared on Instagram, fresh off a run in the mountains, looking significantly thinner and more defined than in his prior fighting days, and declared that he was coming back and wanted to become the middleweight champion of the world.

Byrd last fought in 2009, and hasn’t fought at the middleweight limit since 1992, when he was fighting at the Barcelona Games. 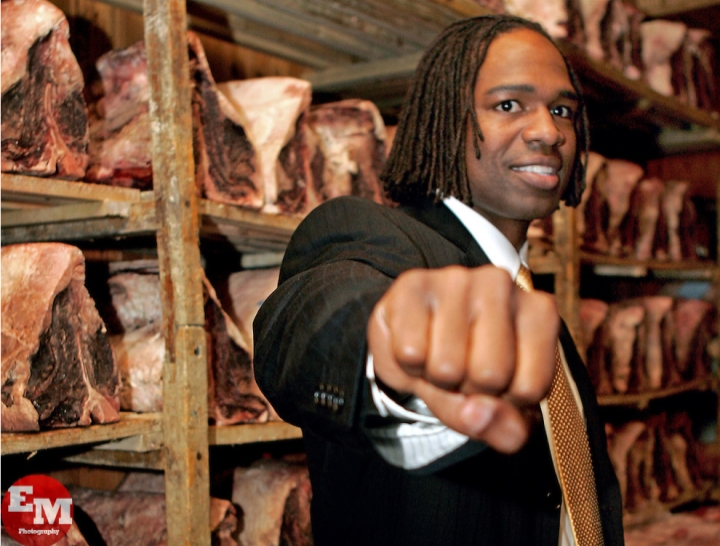 To grasp why Byrd would want to do something as risky as returning to ring at 50, in a sport he feels mistreated him, one must understand two things. First, as HBO commentator Jim Lampley put it during the fourth round of his IBF heavyweight title win over Evander Holyfield, “he's just a fan who can't resist the sport." And second, he can’t conceive of a trauma worse than what he endured emotionally and physically over the last eleven years.

“I had nerve damage in my foot so bad. I was suicidal, going crazy. I told myself, when I get through this, I'm going to reward myself with a middleweight title. I never got a chance to fight at middleweight, so this is my time,” said Byrd.

“In 2009, I had a major freakout. I was in major pain, and I started taking Lyrica. I was having suicidal thoughts. I almost jumped on my son and my nephew, we were surrounded by cops, downtown LA, it was crazy. I lost my mind.”

The subsequent years were a parade of surgeries, doctors’ visits and prescriptions trying to cure his litany of issues. Byrd says he had both hips and both shoulders replaced, but says that chronic nerve damage in his foot was worse than the pain in both his hips and shoulders combined.

In 2012, Byrd visited the Mayo Clinic and says he was sent home with a clean bill of health, doctors telling him that although they believed his foot was indeed giving him immense trouble, they couldn’t determine why, and couldn’t offer a solution other than additional painkillers.

Byrd determined that the physical pain couldn’t just be from his years of fighting and athletic training—particularly for a fighter who by his own admission didn’t take an overwhelming amount of punishment in the ring due to his defensive prowess. While the wear and tear had its effect, it was amplified by the additional weight he carried while doing it, and how he put and kept that weight on to fight above 200 pounds.

“To say I was eating non-stop would be an understatement. I trashed my body with the worst junk food you could eat, and it killed me. I had allergies, I had extreme fatigue when I was fighting at heavyweight. My body went through it. Nobody knows about that. It ruined me. It was because the food was devastating my body. I put on fifty pounds. And I still won two heavyweight titles,” said Byrd.

Byrd made the switch to a vegan diet, and a particularly strict version of it. Byrd only eats plants, no sugar, no processed foods, no wheat.

But there’s one particular plant that Byrd says has made the biggest difference: Cannabis.

“Shannon Briggs, he's the one who got me smoking. He pushed me big time, because he saw all the pain that I was in,” said Byrd. “The first time I did it, I hit a bong with Shannon Briggs. I fell asleep at first, but I woke up and I had a lot less pain in my foot, and I was like, what is this?!”

Byrd uses both THC and CBD products daily, and not long after beginning to use them, noticed that he felt both healthy and happy enough to start running and exercising again. Soon enough, he was the lightest he’d been in 28 years.

“My wife looks at me and was like, you're thinking about fighting again, and I'm like yeah. I can't die with this on my mind. I've got to see what I would have done in my weight class. I can't die with that on my mind,” said Byrd. “When I was at heavyweight, I knew I was the middleweight champion. The matchup was always supposed to be me vs. Roy Jones. Period. I always thought I was better than him, and he's a great fighter. I just wanted to be in front of him, that's all I wanted to do.”

Fighting Roy Jones would have very much been a possibility for Byrd in present day, given Jones’ recent return to exhibition boxing against Mike Tyson in November. However, Byrd insists his return is not an exhibition tour—and even if it were, he’d be too small to fight Jones now anyway, and that’s not a road he wants to travel down again.

Instead, he wants to write not just a new ending, but an alternate plot to his career entirely.

“I'm going to relive my career, the real career I was supposed to fight at middleweight,” said Byrd.