Chris Billam-Smith Ready To Fight Anyone After Latest Win

Fight Camp, Brentwood - Chris Billam-Smith blasted out Cardiff's Nathan Thorley in two rounds as he successfully defended his Commonwealth Cruiserweight Title for the first time in the opening bout of Fight Camp Week 2.

The 30-year-old utilised his superior size and power, backing up Thorley from the off and forcing 'Thunder' to take a knee with a big left hook at the end of round one. 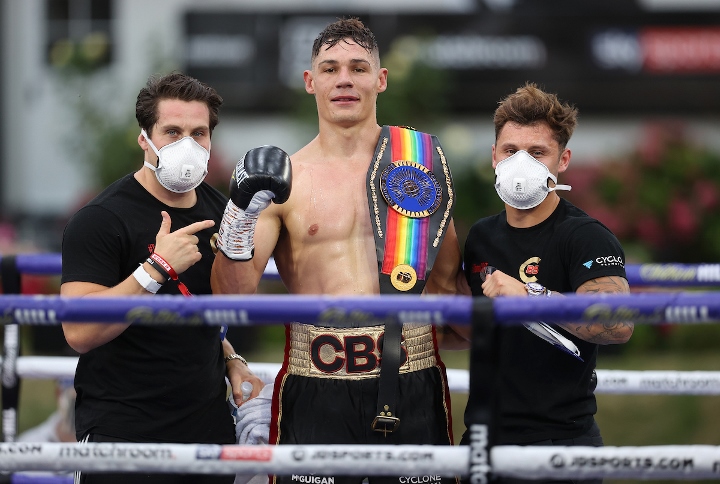 "He had a fight back in there but as soon as he had success I knew he'd get reckless so I just walked him onto a shot. I have boxed out in a tent in Brentwood when I was an amateur funnily enough. I got the win then as well. It's an unbelievable set up. Very different with no crowd and not having my fiancé here. We're meant to be getting married tomorrow so I'll send my love to her.

"It's a completely different and a great set up. It's wicked. I trust the team. They've looked after me superbly so far. We'll fight anyone. I think I've proven that already. If that fight comes for me it's a brilliant fight. Such a prestigious belt in the European Title. The fights are there. Whatever Shane and Eddie want to do with me, then great."

Sensing an early finish, 'The Gentleman' resumed his ruthless assault in the second round and clubbing punches again floored Thorley, who briefly fired back defiantly, before a crunching counter punch prompted the referee to wave it off.

The impressive win potentially sets up a shot at the vacant European Title, previously held by Billam-Smith's gym mate Lawrence Okolie, and Belfast's Tommy McCarthy could be the man he faces for the belt later this year.

"Chris started fast," said his trainer Shane McGuigan. "I think Nathan's game plan was to try and take it to the later rounds and use his feet and mobilise. Chris started so fast and hurt him early. His physical size and his punching power, I think he's a real force.

"He's been out sparring Mairis Briedis. He only sparred Lawrence Okolie this whole way through camp. The two of them are brining each other on all of the time and I'm really happy with how quickly he's progressing. I really want to push him on to European level now. The European Title is vacant now that Lawrence has vacated it. I think we could push Eddie to try and get Tommy McCarthy against Chris Billam-Smith for the end of the year."

With the way things are with covid 19, the best fight @ 200Lb has to be Billam Smith/Riakporhe II with both British & Commonwealth title's on the line. The EBU title is currently vacant so if Fa$t £ddie can get…