It's been over two years since heavyweight Chris Arreola has fought but he will be making his return on December 1st at the Staples Center in Los Angeles on the Deontay Wilder-Tyson Fury undercard.

"Yes, December 1st,"confirmed Henry Ramirez, the long-time trainer/manager for Arreola, who added that this upcoming bout would be,' 'off-TV and just to get him back in there and see where he's at."

In July of 2016, Arreola was stopped in eight rounds by Wilder for the WBC heavyweight crown. 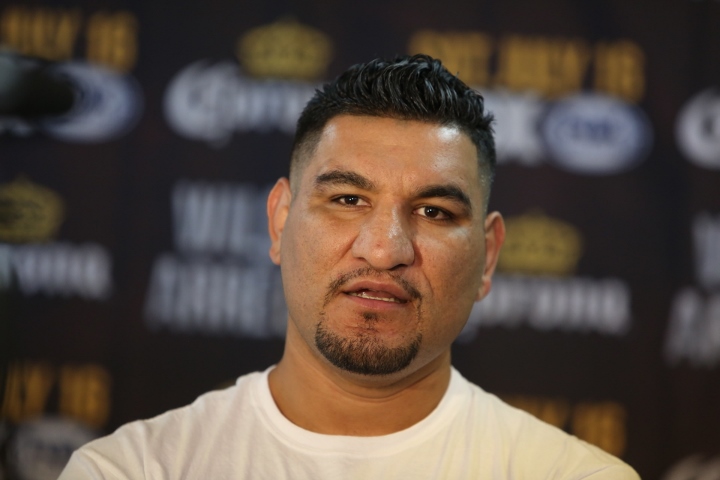 During his hiatus from the ring many believed the 37-year old Arreola(36-5-1/31 KO's) had retired from the sport.

"He would stop by the gym here and there, train, but nothing that was screaming, 'that I want to fight.' I honestly thought - and no one ever discussed it - he was probably done," admitted Ramirez.

"But he never came out and said it. So in July he called Al (Haymon) and said that he wanted to fight. Al called me and asked if I was on board. I said yeah.

"We're just going to take it fight-by-fight, see where he's at and we'll go from there."

Ramirez says he likes what he's seen from Arreola in the gym but makes it clear that if he doesn't like what he sees on December 1st (against a still to be determined opponent) that he will not hesitate to advise Arreola to retire.

"Absolutely, that's part of the plan," he explained. "When we discussed it and when I discussed it with Al, it's on a fight-by-fight basis because ultimately nobody wants to see anybody get hurt."

I had no idea that he was that old., though it adds up if you think about it. No chance he makes it anywhere of course, he wasn’t that good even in his prime.

I'm convinced that half of you idiots don't even read the articles. CLEARLY states the fight will not be televised.

shake the cobwebs fight for him, its not televised so not much will see it too

So they are digging out all these semi-retired Mexican Americans to sell this card?

[QUOTE=TinAgeOfBoxing;19224028]Shaping up to be a real joke of a card. Fury with no warm ups semi retired fat slob no nandrolone, Ortiz in a bs fight and fat tiiities grotesque slob areola. Even worse than the GGG/Clenelo II PPV card…