Chris Algieri is deep in preparation ahead of his clash with Britain's Tommy Coyle on the undercard of Anthony Joshua's IBF, IBO, WBA and WBO world title defences against the all-action Andy Ruiz.

Algieri returned to the bright lights of big-time boxing on DAZN in January of 2019, winning the WBO International super lightweight title in a war against fellow New Yorker Daniel Gonzalez, edging closer towards a crack at the world title, with Maurice Hooker holding the WBO version of the world crown.

With a potential world title clash on the horizon for Algieri this year, he can afford no slip-ups against Tommy Coyle and Algieri enters as a heavy favourite against the Brit. The Long Island native opened up about what his time outside of the ring had entailed and how his training had gone prior to his clash with Coyle. 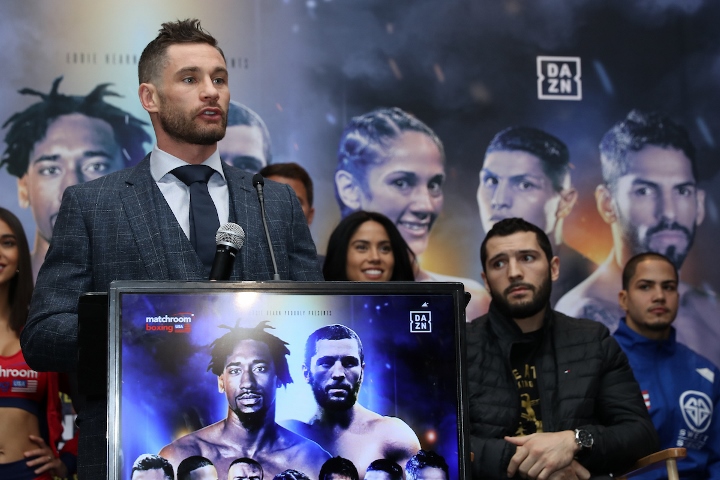 Algieri stated, "I have spent a lot of time developing the content for my new cook book entitled The Fighters Kitchen, which is available now online and in stores. I want to give back to not just the boxing industry but the fitness industry as a whole, and I've found a way to do that by writing a cook book which includes all of the recipes I have used my whole career which has helped me make 140lbs for my whole career whilst eating like a king!"

Algieri continued, opening up about his camp, "Training is a regular thing for me. I'm an athlete and I live in the gym, it's my lifestyle choice. I am enjoying training as ever and I'm always learning under the guidance of Andre Rozier, The Havoc team and Keith Trimble who has been an integral part of my team for years. I have an amazing team and fantastic fighters around me on a regular basis and I truly believe that people still haven't seen the best of me yet."

Standing in Algieri's way on route to a possible world title clash in 2019 is Britain's all-action Commonwealth champion Tommy Coyle, and the Huntington native gave his take on his dance partner on June 1.

The former WBO world super lightweight champion said, "Coyle is a game fighter who always comes to fight. He's always in entertaining fights and so am I so it's going to be a great fight on June 1 but I am confident I will emerge victorious and continue on my path to becoming a two-time world champion."

[QUOTE=Scopedog;19747043]Coyle is limited he can crack hard. With Algieri’s recent form I’m not convinced that this is a gimme fight.[/QUOTE] i really dig algieri, but yea u rite.

It will be better than Spence vs Garcia for a start.

Algeri got this Coyle is just an eight round club fighter at most, Algeri although shot has reliabilty

Algieri's an old war horse at this point...I have Coyle beating him