Yet another bizarre turn of events has surrounded the World Boxing Super Series—and this time from a boxer who has nothing to do with the tournament.

It was the point that Derek Chisora wanted to make abundantly clear while asked to discuss his Oct. 26 heavyweight showdown versus former titlist Joseph Parker at London’s O2 Arena. The bout will serve as the chief support to the WBSS 140-pound finals between unbeaten titlists Regis Prograis (24-0, 20KOs) and Josh Taylor (15-0, 12KOs), a status that doesn’t at all sit well with the veteran heavyweight contender.

“Just a couple of questions I want to clear while we’re sitting up here,” Chisora (31-9, 22KOs) stated when it was his turn to speak during Monday’s press conference in London. “Who’s the main event of this (card)?”

The absence of Parker (26-2, 20KOs) from the session only gave the London-based heavyweight free reign to pick and choose his verbal sparring partners. Immediately in his line of fire were his promoter and one-half of the main event he’s quick to dismiss.

“The gentleman sitting next to you (Regis Prograis),” Eddie Hearn, Chisora’s promoter replied, at the time seemingly unaware that the 35-year old heavyweight was not in a joking mood. 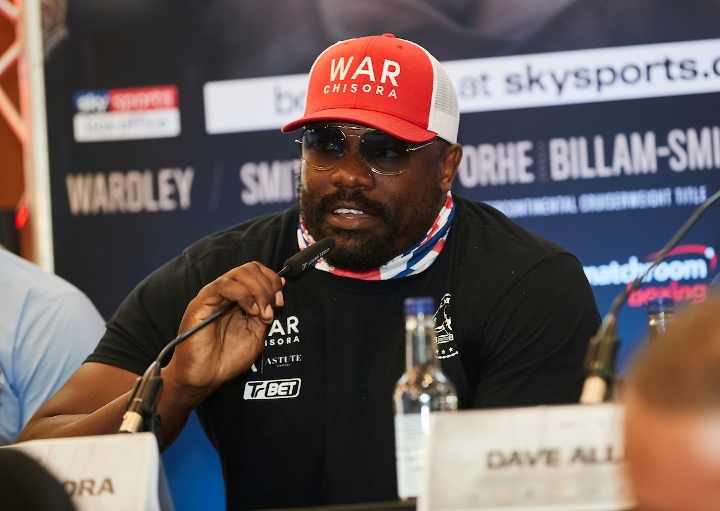 That was all that was needed to wind up the already combustible boxing personality.

“Tbat’s not going to work for me,” Chisora bluntly stated, before entering a profanity-filled rant that was not without its fair points. “I’m not going to sell out O2 for them guys to be the main event. We need to change that. We’re on Box Office because of this. They’re not going to sell Box Office on their own, so f*** that.

Chisora has fought in the venue in each of his past five starts, including co-feature attraction in his two most recent bouts. A 10-round win over Senad Gashi in April came in supporting capacity to David Allen’s 3rd round knockout of Lucas Browne, having willingly granted his countryman top billing.

Similar concessions were made for good reason in his eventual two-round destruction of Poland’s Artur Szpilka in July. The bout came on the undercard of a July 20 bill topped by Dillian Whyte’s 12-round win over previously unbeaten Oscar Rivas.

Playing second fiddle to Whyte (26-1, 18KOs) made sense, as Chisora suffered an 11th round knockout loss to his longtime rival in their memorable rematch last December.

However, he has not at all warmed up to the concept of being tasked to sell tickets and Sky Sports Box Office buys for a main event that doesn’t quote carry the same drawing power in his hometown. Scotland’s Taylor has become a sizeable gate attraction at Glasgow’s SSE Hydro, which has housed his last four contests.

Of course, selling in one part of the United Kingdom does not guarantee success throughout the region.

Not even the soothing voice of Sky Sports’ Adam Smith could help calm the tension.

“I’m gonna get on with it if you tell me am I the main event or not? If not, give me more money and then we get to business. I’m sorry to do this, but I feel like you’re f****ng me with no Vaseline.”

For now, the card stands with Chisora-Parker at the top of the undercard, with Prograis-Taylor at the top of the marquee. The irony is well noted, as the rant comes exactly one month to the day that Louisiana’s Prograis announced he was walking away from the WBSS tournament, complete with a filed lawsuit against Comosa AG for alleged breach of contract.

Those issues were ultimately resolved, although an entire new set of problems have now come to the surface.

It’s clear that nobody was in the mood to hear whatever concerns were being raised by Chisora—at least not in the manner in which they were presented—nor was the heavyweight the least bit impressed with what’s at stake in the 140-pound tournament finals.

“Nobody gives a f*** about the Ali Trophy, it’s past date,” stated Chisora, referring to the tournament’s top prize named in honor of the late, all-time great former three-time heavyweight champion Muhammad Ali. “The heavyweights are back. Mike Tyson said it, when (Anthony Joshua) knocked out… Wladimir Klitschko (in April 2017), no more money to the small guys, the money is going back to the heavyweight division.

“We haven’t heard about the Ali Trophy for the last six months and now they want to jump up on our f****n’ show on Sky. F*** that, give me more money and we can get to business. If you can’t just tell me, you can’t.”

It was clear by the time the microphone was passed over to Sauerland to introduce the main event that Chisora was checked out from the session.

“Let me do my thing?” Sauerland asked as he was once again interrupted by Chisora, who in turn added his response along with his thoughts on playing second fiddle on the show.

I agree with Chisora. No doubt Prograis fight is a higher level but Chisora is bringing the fans to the O2 I loved this rant. "You are ****ing me with no vaseline!" Hearn claims he is co-headliner and it was…

Time for Chisora to join Fury over in the States for some real money.

[QUOTE=kafkod;20049885]If he was a random casual sports fan he would know who Josh Taylor is and rate him higher than Chisora. If he wasn't, he wouldn't have a clue about either of them. Is Del Boy a household name in…

WAR Rougaroo! Can't wait. I don't really care about Chisora/Parker....the Kiwi can stink out the joint

[QUOTE=LacedUp;20049852]And so what? :lol1: People loved both fights. You ask the random man in his 20s who Taylor is and he wouldn't have a fuking clue. And that's the difference in commercial power.[/QUOTE] If he was a random casual sports…