Chavez Sr. Gives Omar One Final Chance or Back Will Be Turned

The son of Mexican boxing legend Julio Cesar Chavez, Omar "Bussinesman" Chavez is aware that there is no tomorrow and he will reappear in the ring on October 27 when he faces the Argentinean boxer Nicolas Luques, in a battle agreed upon for ten rounds, in Culiacan, Exico.

Chavez (36-5-1, 24 KO's) will seek to return to the path of victory after five months of having been defeated in his last contest, and he said he is happy to reappear in his homeland and before his people.

"You learn from defeats and I've had my lesson. I am committed to my father and all my family, with the fans, to apply one hundred percent in my next commitment, because I feel I have the conditions to achieve a world title," said Omar during the official presentation of his match with the legendary former champion in three different divisions. 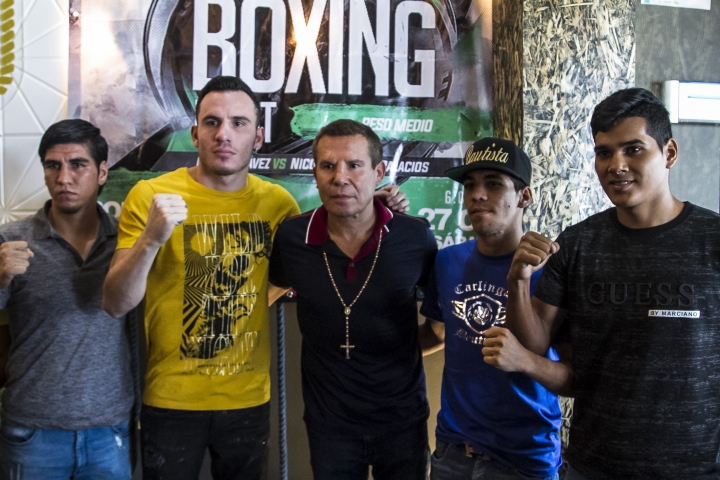 Luques (10-5-0, 1 ko's), 28, will be a very difficult opponent, according to Omar, who saw him face Ramón "Inocente" Alvarez on August 25, the last fight that the Argentine has held.

"I have prepared myself conscientiously, I know that before my people I must perform a perfect fight, in which I can demonstrate that I have the tools to go far, on October 27 is to win or win, and any other outcome would see me say goodbye," said the Sinaloa 27 years old boxer.

For his part, Julio César Chávez issued a very firm warning, that if his son fails to reach his potential in this fight, he better dedicate himself to something else.

"I personally would not offer him another chance [if he underperforms], and he would have to fight on his own, without my support. I've already talked to him seriously, and he already knows what he has to do," Chavez Sr. said.

Chávez Sr. says that his son can beat any opponent if he dedicates himself to his craft and maps out the right strategy.

"I do not want to see him slow down and be in there without throwing punches like he did in his last two fights. I am very close to him in his workouts and I am sure that this time he will do everything right, but above all, to give an excellent display. I do not care if he loses or wins, because up in the ring you win or lose; I am interested in him putting forth a pleasing display, to be brave, to fight," Chavez Sr. said.

[QUOTE=NachoMan;19184963]You know, despite his doucheyness, I can't think of many dudes who seem to love their son more than Angel Garcia. JCC often acts like he raised step-sons.[/QUOTE] I believe you. In his own demented way he thinks he standing…

[QUOTE=TJ highway;19183944]Sr makes Angel Garcia look like a father of the year candidate! [IMG]http://www.myboxingfans.com/wp-content/uploads/2013/09/angel_garcia_race-530x317.jpg[/IMG][/QUOTE] You know, despite his doucheyness, I can't think of many dudes who seem to love their son more than Angel Garcia. JCC often acts like he…

[QUOTE=trippers1;19183978]I wonder if he has forced them down the boxing route and now regrets it. As let face it the kids arent made out for boxing.[/QUOTE] I think Jr had the right stuff except for his daddy's heart! Sr had…

I wonder if he has forced them down the boxing route and now regrets it. As let face it the kids arent made out for boxing.