Former two division Sergio 'Maravilla' Martinez returned to the ring last weekend and picked up a seven round stoppage win over José Fandino in Spain.

For Martinez, 45-years-old, it was his first contest since 2014, when he was knocked out by Miguel Cotto at Madison Square Garden in New York City.

One of Martinez's more memorable fights, was his 2012 twelve round unanimous decision win over Julio Cesar Chavez Jr. to capture the WBC middleweight title. 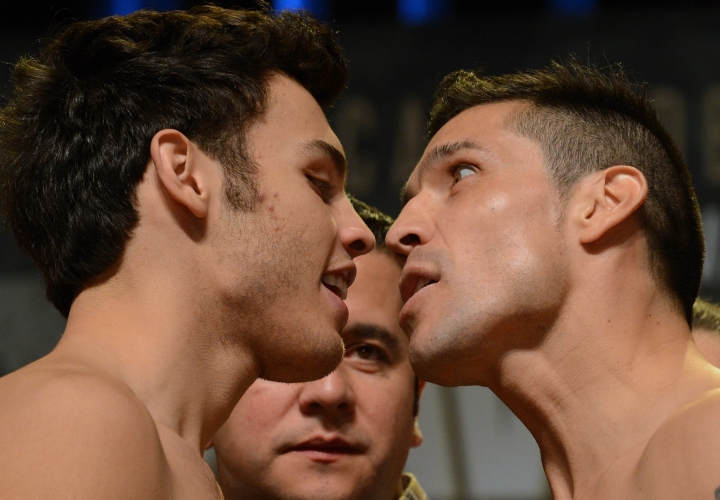 Last year, there was talk of a rematch between Martinez and Chavez Jr, but it never came together.

Chavez Jr. would instead face Daniel Jacobs in December. The Mexican star would lose that bout after suffering a broken nose in the fifth and electing to stop the action.

Since Martinez's return, the two have been trading words through the press and on social media.

Martinez called Chavez Jr. a liar and says the Mexican boxer has never been serious about a rematch.

Chavez Jr, who returns to action next month in Mexico, says he is willing to do the fight at any time.

"Martinez is old now. He won well, but his opponent [Fandino] was a lump. He couldn't move side to side, his legs didn't respond to him to do those movements. I think he's no longer there to box with anyone. He needs to box with me, so I can let him retire with some money. I am going to beat him because I'm going to prepare very well for that fight, apart from the fact that he is already old. What he says or speaks about does not interest me. That is what he wants, to attract attention," Chavez Jr. said.

“He has never looked for me, Martinez never looked for me. He was retired, he didn't give me a rematch. He preferred to fight with Miguel Cotto than with me, everyone knows it. I have never turned him down.... What happened is that the American networks did not accept his fights because he had a knee injury [so he retired]. I've always been willing to fight him. If I fought Daniel Jacobs with three years of inactivity,  how could I not fight an old man like him who is useless. It has to be in Mexico or Argentina. In the United States they won't accept an old man fighting."

Lol... Is anyone still checking for the fighter also known as “not the Chavez Sr?” This guy will soon be angling for amputees, derelicts and the elderly. Maybe he will show us how disrespectful he can be and actually challenge…

[QUOTE=ShoulderRoll;20731199]Does Chavez Jr even have any fans at this point?[/QUOTE] I don't think he even has any fans in his own family at this point. He is a disappointment and an embarassment to Mexican boxing.

45 is not too old if you have sound fundamentals like Bernard Hopkins. Chavez jr shouldn't be name calling after he quit against Jacobs and Fonfara.

If you wanna fight an old man, try Golovkin.