Julio César Chávez Jr., the first middleweight champion in the history of Mexican boxing, made it clear that despite all of the criticism, he has three or four years left in professional boxing, and did not rule out rematches with Canelo Alvarez or Daniel Jacobs and even a fight with Gennadiy Golovkin.

Chávez Jr. said that the criticism he has obtained for his statements on social networks does not hurt him. 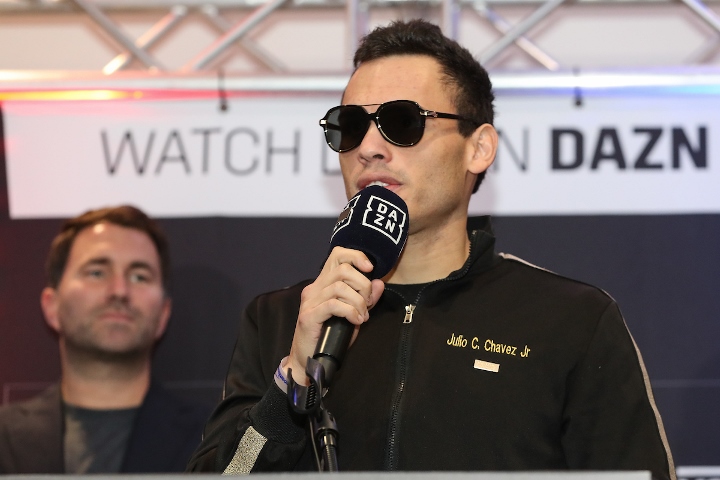 The 'Son of a Legend' believes that he still has several years left in the sport, after suffering a TKO defeat at the hands f Jacobs in December.

"With perseverance [I have about] three or four years [left in boxing], perseverance and discipline and staying well, and I can give myself time to be an athlete. I hope that what I did wrong does not affect me and I can keep moving forward,” said Chavez Jr. told ESPN Deportes.

"The fights that people want to see are with Canelo, Golovkin and Jacobs. In the fight with Canelo, he was on top in the situation, favored in some way, he is well known, but it is also known that I did not reach one hundred percent [for that fight] and that there were things that appened outside of boxing that are not known and affected me. [Against Golovkin] I imagine winning by knockout, it would be a very tough fight. I can't really tell you if GGG has diminished or it's just his coach, but he's performed at a lower level in the last two fights."

About the alleged rematch with Sergio 'Maravilla' Martínez, he also said he was willing to do that bout.

"Let Martinez speak to me and we can reach an agreement. I do not want to hit him because I like him," explained Chávez Jr., who at 34 years old and has 51-4-1 mark and 33 knockouts.

Finally, about his controversial videos on social networks, he said that everything he does is for entertainment.

"Many people laugh, I have never been serious and It's really boring in the quarantine. I am going crazy, every day [due to being at home due to the coronavirus pandemic]," Chavez Jr. said.

Everyone wants to ko Ggg now. Not nelo

No one should be covering anything Chavez Jr does anymore. Who cares about this bum

Feed him to Eubank Jr