On this occasion, the son of a Mexican boxing legend strongly criticized Canelo's recent fights and hoped for a rematch in the future.

In May of 2017, Chavez Jr. was dominated over twelve rounds by Canelo.

Their contest took place at a catch-weight of 164-pounds.

According to Chavez Jr, who had not fought at that low of a weight since September of 2012, and making the weight limit completely zapped his body of any energy. 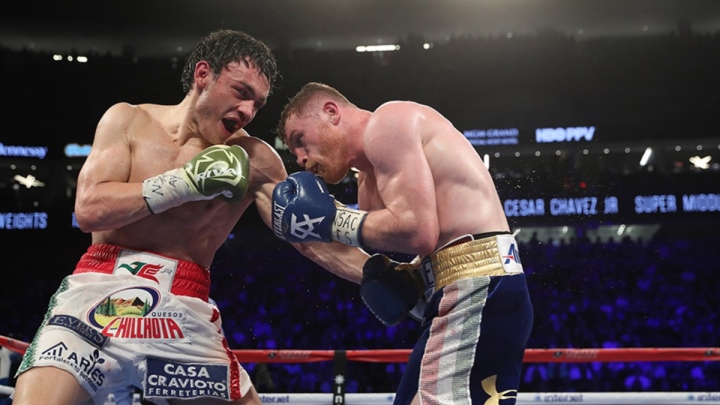 Chavez Jr. was furious when Canelo fought at the full super middleweight limit of 168 the following year, in a KO win over Rocky Fielding. Last year, Canelo went as high as the light heavyweight limit of 175 to knock out Sergey Kovalev for the WBO title.

"Canelo is a good fighter, but these days he is extremely overrated. For me and for many, in his last 10 fights, he has had an advantage with weight. In the two fights with Golovkin he went to a draw and lost [he beat Golovkin by majority decision]. The fight [he had with] Cotto could have been a draw and they cheated me with the weight.... by weighing me at nine o'clock and then not being able to eat until one in the afternoon, something that has never been seen in history," Chavez Jr. said.

"I would like a rematch at the [appropriate] weight. Yes, it was difficult to lose, especially when seeing everything that happened, I am completely sure that if I'm at 100 percent and better prepared, I could give a better fight. The first one was very boring and what I'm saying was noticed [by those watching]. My focus at that time was not on boxing. I prepared myself, but not with the conviction of wanting to be the best in the world.

"Today, the best boxers in the world are: Vasyl Lomachenko, Terence Crawford and Errol Spence. All of them are easily above Canelo."

Chavez Jr. returns on September 25 in Mexico, where he faces undefeated Mario Cazares at the light heavyweight limit.

Who cares what that looser has to say. “Stops fighting cause he got hit in the nose”. I still cant get over that.

Canelo have that boy the ass whipping his Daddy should have given him years ago. Chavez Sr. was looking at Canelo wishing he was his son instead of the pathetic druggie he actually birthed. Jr. is at the end of…

[QUOTE=BlackR0bbb;20753512][B]The belt he won vs. Fielding doesn't count. Well, I'm wrong -- it counts to moist fan boys like you. Hey, did you get your latest copy of Ring Magazine?[/B][/QUOTE] I already mentioned that one was bs so I agree,…