Less than an hour after watching his twin brother Angel go the distance for the first time in his career, Chavez Barrientes endured the same experience in his own televised affair.

The 18-year old junior featherweight found himself matched tough in his United States debut, going six hard rounds in barely outlasting Ivan Varela in their FS1-televised affair. Scores were 60-54, 60-54 and 59-55 in favor of Barrientes in their terrific scrap Saturday evening at Microsoft Theater in Los Angeles.

Barrientes—an 18-year old prospect who just graduated from Durango High School in his Las Vegas hometown this past May—was put in a real fight, with Varela never backing down at any point in their fast-paced affair. A natural southpaw who fights out of a conventional stance, Barrientes was effective with lead left hooks and uppercuts, enough to serve as the busier boxer but at no point cracking a dent in his determined foe. 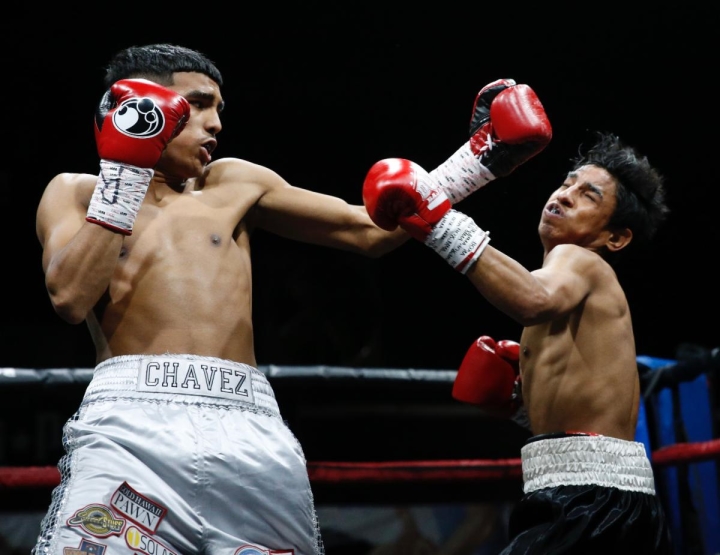 Varela (3-3) dialed up the pressure in round two, charging forward and cracking Barrientes with an overhand right. Barrientes showed his whiskers, as he had to do throughout the fight as Varela was successful on the inside and whenever action took place in center ring.

Barrientes (3-0, 2KOs) occasionally switched between conventional and southpaw, not really discouraging his foe but finding different angles for his left hand shots. It was enough to remain perfect as a pro, certainly learning far more on Saturday than was the case in a pair of 1st round knockouts which previously served as his entire pro experience.

Chavez’s twin brother, Ángel Barrientes was extended beyond the third round for the first time as he outpointed Fernando Ibarra also over six rounds. The twins have fought on the same show for each of their three pro fights.

The boxing brothers served in preliminary action a four-fight card, topped by unbeaten featherweight contender Mark Magsayo in a 10-round battle with Rigoberto Hermosillo.