Mexican icon Julio César Chávez, and five-time champion Jorge “Travieso” Arce, will face each other for the third time in an exhibition fight.

The contest will take place on Friday, September 25, behind closed doors, with live pay-per-view stream of the event through the superboletos.com platform.

During the usual Tuesday conference with the World Boxing Council, this event was officially announced, which is being done for charity, with proceeds to support vulnerable people in Tijuana and Culiacán, who are suffering from the coronavirus pandemic. And, the money generated from the card will also assist with granting scholarships to young people with addiction problems. 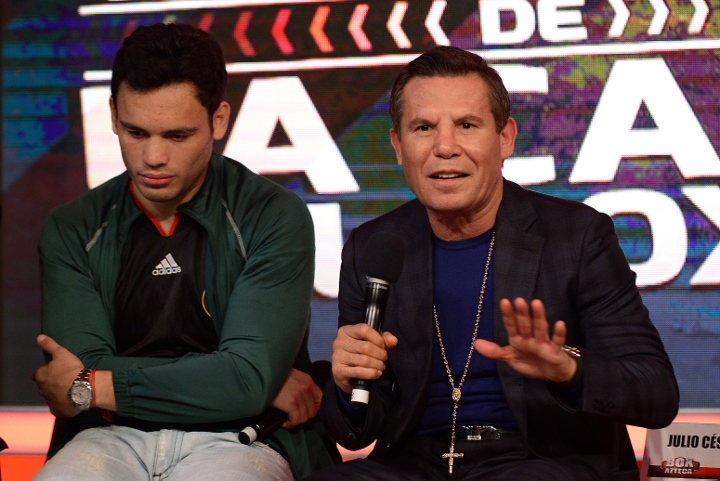 The card will be a two-hour event, which includes a boxing function, and a "post-fight" with interviews and comments.

The main event will be an exhibition match between Chávez and Arce.

For Chavez, the event will be special because he gets the opportunity to share the ring with his children.

The function will take place in one of the lounges of the Grand Hotel in Tijuana at 7:00 pm, and all the prevention and sanitation protocols indicated by the local health authorities and the World Boxing Council will be followed.

According to Chavez Sr, his son Julio is planning to fight in Mexico in October. He is currently suspended in the United States for failing to submit to a pre-fight random drug test, in connection with his December TKO loss to Daniel Jacobs.

"If they want to resume their careers, this will serve them for when there is already an audience. Let's see how Julio develops and how Omar looks. Julio plans to fight in October in Monterrey, but he is going to do the exhibition on September 25, and Omar will fight professionally over eight rounds,” Chavez Sr. said.

[QUOTE=CocoonOfHorror;20705865]Oh, got it. Thanks, I was wondering what was going on[/QUOTE] Welcome :D they already did 2 exhibitions which were very very good. When you have time check them out, you will be surprised how good Sr. still is... more…

[QUOTE=CocoonOfHorror;20691809]What? Arce's last fight was at featherweight!!! Unless Arce has blown up like Prince Naz there's got to be a 40-50 lb difference. Not like Junior will cut weight for an exhibition so he'll be at least 190 probably more.[/QUOTE]…

What? Arce's last fight was at featherweight!!! Unless Arce has blown up like Prince Naz there's got to be a 40-50 lb difference. Not like Junior will cut weight for an exhibition so he'll be at least 190 probably more.

[QUOTE=TJ highway;20690752]Are any of you guys dads? Junior got the look like he was forced to be there. [IMG]https://photo.boxingscene.com/uploads/chavez-britisch%20(4).jpg[/IMG][/QUOTE] Haha, yep. It looks like he's saying to himself: "And to think I could be chillin' out, smoking a big blunt…