For all their trash talk and finger pointing, Jermell Charlo and Tony Harrison have also jawed about strategy in the run-up to their rematch on Saturday.

Charlo spoke of attacking the body and Harrison of countering Charlo’s bull-rush when they sat down separately to break down Harrison’s controversial win last December for Charlo’s 154-pound title.

What was missing, however, was any talk of sports analytics, the metrics-based analysis that was popularized in the 2011 film “Moneyball” and has gained a foothold in the NBA but with the exception of CompuBox, has largely remained a conversation-killer and non-entity in boxing.

Into the breach has stepped Vincent Santino, a 44-year-old boxing enthusiast and cornerman who works as an analytics consultant supplying U.S. businesses with statistical analysis to help improve their bottom lines. He sees an opportunity to lend his metrics-based approach to boxing to help give fighters a competitive edge.

“Why not supplement what can be seen with what is known to be fact?” he told BoxingScene. “It’s about finding as many advantages as possible that you can trust will work.”

Santino did just that for the trainer Joey Gamache before his boxer, Otto Wallin nearly upset Tyson Fury in September, providing a statistical-based scouting report scrutinizing physical advantages and punch stats. Santino also looked at the fight retrospectively to provide their team with future training opportunities.

And he offered BoxingScene a brief statistical scouting report on Charlo’s rematch with Harrison on FOX with the goal of answering the question of why Harrison won the decision back in December when he actually threw so few punches (377 to Charlo’s 548) along with how Charlo can avoid defeat a second time. 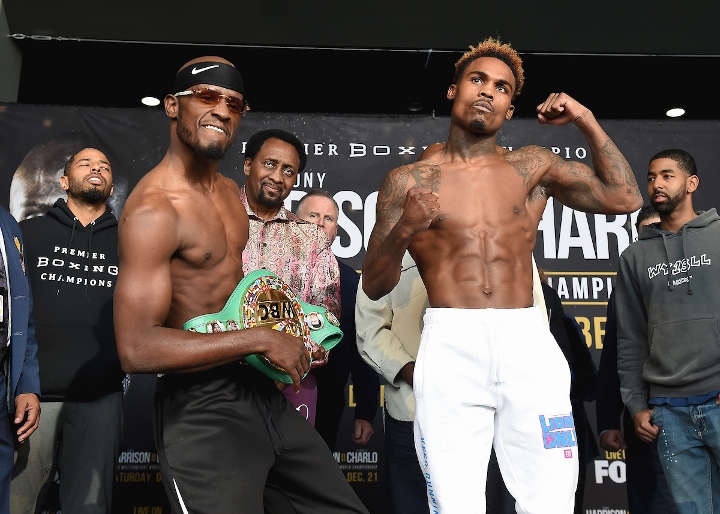 Santino analyzed the judging and punch output in four of Harrison’s most important fights, including his bout with Charlo, to determine patterns and tendencies that could lead to a path to victory for the former titleholder from Houston.

What Santino found was extremely illuminating and revealed the extent of just how unusual Harrison’s victory over Charlo was: Harrison threw fewer punches against Charlo than he had against any other top opponent — and he still won (Charlo out-landed him 160-128 including power punches by a 108-71 margin). But those are just numbers.

Harrison has a rabbit-out-of-the-hat ability to keep his fights close, even the ones he loses and is knocked out in. He seems to fight when he has to, coasts when it benefits him and generally has a remarkably high boxing IQ. So, what’s the right strategy for Charlo to adopt against Harrison? It has to do with not allowing Harrison to mesmerize the judges with his connect rate, which ebbs and flows heavily from round to round, giving the impression he may be in a closer fight than he actually is, Santino says.

Examples of other close Harrison fights include a split-decision win over Ishe Smith in 2018; a one-round difference on two scorecards and a draw on the third against Jarrett Hurd in 2017 in a fight Harrison was stopped in the ninth round; and a draw, one, and two-round lead on three cards versus Willie Nelson in a bout he was also stopped in the ninth back in 2015. “You can visually confirm Harrison’s level of effort varies quite a bit round to round - presumably when he feels he has to do better or can take a break,” Santino noted.

Cold data can be used to understand the judging in these fights to gain insight into Harrison’s Svengali-like ability to sway judges (see graphic). 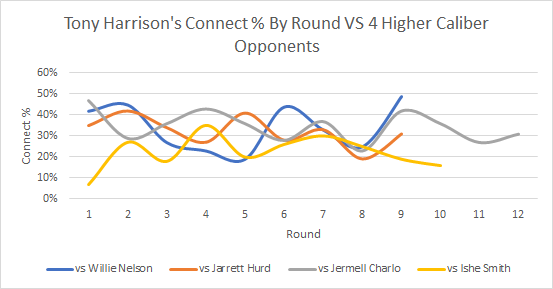 “The important take away is that this abnormal up and down variability likely sways the judges to see his fights as ‘dog fights’ which are ‘back and forth’ and potentially causing them to award him rounds he may not deserve when his opponent lands more punches, as was the case in his last fight with Charlo,” he said.

So how can Charlo prevent Harrison from giving the judges the perception he is in a firefight? By fighting at a more measured, consistent rate.

“I would advise him to leverage a stable workload via an inside fight strategy, so his outworking of Harrison appears steadier,” Santino said. “This would prevent Harrison from taking rounds off, taking them easier, or ramping up when in response to a good Charlo round. I would apply these insights during training camp in the form of sparring with this style and I would also set even punch volume targets for him to hit round-by-round.”

So, slow and steady wins the race for Charlo.

He also suggested as an alternative, for Charlo to fight a counter-punching style to ensure that Harrison is forced to consistently take the lead and be more active. Harrison was especially cautious in the first fight with Charlo, a product of Harrison likely being wary of Charlo’s power.

“Looking at another piece of data - Harrison's output fight-by fight against top opponents, we see that his punches thrown are lowest versus Charlo,” he said of the below chart. “This implies Harrison may be unusually concerned about the knockout versus Charlo, which pushes us further in the direction of leveraging an aggressive inside fighting style.”

Santino acknowledged that while data is useful it by no means suggests that a fighter can't find success in other ways or that it could ever replace a trainer’s knowledge or a fighters’ ability and intelligence. “There are so many intangibles such as mental state, training camp, venue and willpower that can also create or offset disadvantages,” he said.

And in the case of Charlo and Harrison, there’s the trash talking factor that has made this rematch so much fun to follow. But boxing analytics is one more useful tool that fighters can apply to gain an edge.

“Giving trainers supplementary tools to succeed will only improve outcomes for fighters,” Santino said. “It’s something every trainer should evaluate before camp starts.”