Charlo Won’t Press For Another Spectacular KO Against Trout

Jermell Charlo has knocked out each of his last four opponents.

The unbeaten WBC super welterweight champion’s past two knockouts both were candidates for “Knockout of the Year” in 2017. Though thankful for those impressive victories and what those memorable knockouts have done to enhance his status in the sport, those accomplishments haven’t changed Charlo’s perspective.

Houston’s Charlo isn’t approaching his fight against Austin Trout on Saturday night as if he must record another spectacular knockout because of what has happened in his most recent wins. 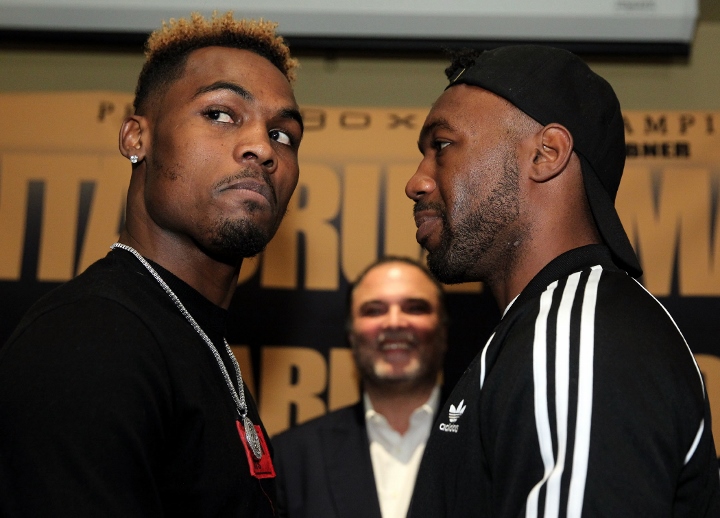 “I’m gonna do what I’ve gotta do,” Charlo said during a recent conference call. “I don’t know what’s gonna happen. Anything can happen. We both two men, putting our life on the line. I don’t know how he views this, but I view it a little bit different. You know what I’m saying? I take this – this is deep to me.

The 28-year-old Charlo (30-0, 15 KOs) needed just one perfectly placed right hand to knock out Erickson Lubin (19-1, 14 KOs) in the first round of his last fight, October 14 at Barclays Center in Brooklyn. In his previous appearance, Charlo’s crushing right hand knocked Charles Hatley unconscious in the sixth round at Barclays Center.

In the bout before he beat Hatley (27-2-1, 19 KOs), Charlo came back from an identical deficit on all three scorecards (69-64) to knock out John Jackson in the eighth round. Charlo won the then-unclaimed WBC 154-pound championship by knocking out Jackson (21-3, 16 KOs) in May 2016 at The Cosmopolitan in Las Vegas.

Trout was stopped inside the distance for the first time in his career in his last fight, a technical knockout loss to IBF/IBO/WBA champ Jarrett Hurd (22-0, 15 KOs). The former WBA super welterweight champion declined to answer the bell for the 11th round of their October 14 bout at Barclays Center.

The 32-year-old Trout (31-4, 17 KOs), of Las Cruces, New Mexico, still hasn’t been truly knocked out, nothing close to the way Charlo knocked out Jackson, Hatley or Lubin.

“At the end of the day, I don’t care,” Charlo said. “I don’t know. I’m not with the ruthless. I’m not trying to go in there, trying to destroy and kill, because I know that’s a mistake that a lot of boxers make.

“I grew up watching boxing all my life, and I know for a fact that if you go in there looking for the knockout, it don’t come. So therefore, I’m going in there to box, be slick and smart, and be strong at the same time and make it 12 rounds, 36 minutes.”

Showtime will televise Charlo-Trout as the opener of a doubleheader Saturday night from Staples Center in Los Angeles. Leo Santa Cruz (34-1-1, 19 KOs) will defend his WBA “super” featherweight title against Abner Mares (31-2-1, 15 KOs) in the main event – a 12-round rematch of an August 2015 battle Santa Cruz won by majority decision at Staples Center.

Charlo could have taken a much better opponent than Trout who is on the way down the Hill and to beat him accomplishes nothing...

[QUOTE=Input1914;18828314]I'd actually like to see either Charlo win a fight without KOing their opponent. Aside from the other Charlo beating Trout these guys seem to heavily rely on their power.[/QUOTE] Just shows you haven't been watching Charlo long. Before those…

[QUOTE=BIGPOPPAPUMP;18828273]Jermell Charlo has knocked out each of his last four opponents. The unbeaten WBC super welterweight champion's past two knockouts both were candidates for "Knockout of the Year" in 2017. Though thankful for those impressive victories and what those memorable…

I'd actually like to see either Charlo win a fight without KOing their opponent. Aside from the other Charlo beating Trout these guys seem to heavily rely on their power.

Charlo fighting someone Hurd stopped already LOL what does this fight prove? HURD Just fought lara and now you are fighting his leftover SMH