Charlo: I'm Best Fighter At 160; In Due Time, World Will See

NEW YORK – If heavily favored Jermall Charlo defeats Dennis Hogan on December 7, even Charlo realizes that win wouldn’t do much to enhance his standing within the middleweight division.

The challenges Charlo insists he wants haven’t materialized, though, thus he’ll remain busy by boxing an opponent whom many maintain should’ve been crowned a 154-pound champion after his last fight against Jaime Munguia. Nevertheless, Charlo claims he is the fighter to beat in a deep division that also includes Canelo Alvarez, assuming he returns to it after facing WBO light heavyweight champion Sergey Kovalev, as well as IBF/IBO champ Gennadiy Golovkin, WBO champ Demetrius Andrade and Sergiy Derevyanchenko.

“I am the best fighter at 160 pounds,” Charlo said during a press conference Thursday in Manhattan. “In due time, the world will get a chance to see me prevail and be the best fighter I can be. You know, it’s some great fights at 160. It’s some great fights at 168. I even had the idea and thought of touching [154] again and just, you know, clean it up. But, you know, I’m the man at 160. And, you now, [Hogan has] big hopes and big dreams. The belt not going nowhere – period.” 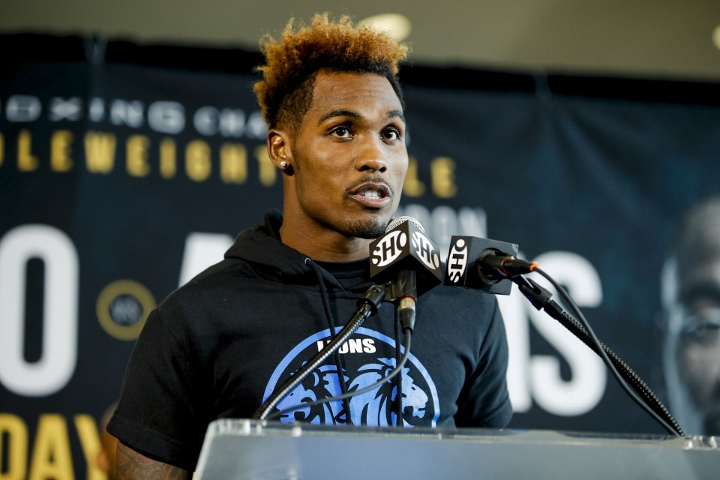 Charlo is the WBC middleweight champion because that sanctioning organization elevated Alvarez to the unprecedented status of franchise champion three months ago and removed the interim tag from Charlo’s championship. Since moving up from junior middleweight 2½ years ago, Charlo has won middleweight matches against Jorge Heiland, Hugo Centeno Jr., Matt Korobov and Brandon Adams.

Charlo agrees that there are much more meaningful middleweight fights for him than facing Hogan. The 29-year-old Houston native is just trying to remain patient while waiting for one of those higher-profile fights to come together.

“One-sixty is my division,” Charlo said. “Obviously, I want the bigger fights at 160. That’s not what’s on the menu right now. So, I’m gonna just do what I have to do and maybe next year …”

Charlo (29-0, 21 KOs) stopped short of finishing that sentence. He instead shifted the conversation back toward Hogan (28-2-1, 7 KOs), a 34-year-old, Irish-born Australian who has lost only the aforementioned majority decision to Tijuana’s Munguia (34-0, 27 KOs), the WBO junior middleweight champion, on April 13 in Monterrey, Mexico, and a unanimous decision to Jack Culcay (26-4, 13 KOs) in December 2015 in Wilhelmsburg, Germany.

“I mean, I’m not looking past Dennis Hogan,” Charlo said. “But he has nothing that I have to worry about. All that talk – I’m gonna gain a lot of [Irish] fans on December 7th. So, you know, it is what it is. Talk is cheap, so we’ll find out what’s up whenever we get in the ring. I’ll see y’all December 7th.”

Showtime will air Charlo-Hogan as the main event of a tripleheader December 7 from Barclays Center in Brooklyn. The other two televised bouts have yet to be announced.

If your next fight isn't against Canelo, Golovkin, Murata, Derevyanchenko, Jacobs, or Andrade... then shut the hell up and go away.

[QUOTE=j.razor;20140743]But watching Pvssy-G fight bums is what interests you....got it.[/QUOTE] Lol you are jumping to conclusions here pal, naa haven't been excited about a GGG fight except for his Canelo fights. Now GGG-Jermall would be something, but these two just…

[QUOTE=j.razor;20140026]You another lying poser. You know damn well these dudes are ducking him. Man the fvk up & ask for Jermall vs Pvssy-G or Nelo.[/QUOTE] Koroborov gave him hell, arguably beat him, but he don't want to give koroborov a…

[QUOTE=j.razor;20136653]He's been at 160 for a year & dudes are ducking him. Stop ACTING like you don't know.[/QUOTE] It looks to me like pbc is squandering the prime of charlos career by being unable to land him any meaningful fights.…