Canelo holds the WBC, WBA middleweight titles. Charlo has been the WBC's mandatory challenger for some time and it was expected that he would face the winner of Canelo vs. Gennady Golovkin, who met in a rematch back in September.

But instead of ordering Canelo to face Charlo - the WBC would order a final eliminator between Charlo and Golovkin. Golovkin had no interest in the fight and Charlo is going to fight on December 22 in a stay-busy fight against Willie Monroe. 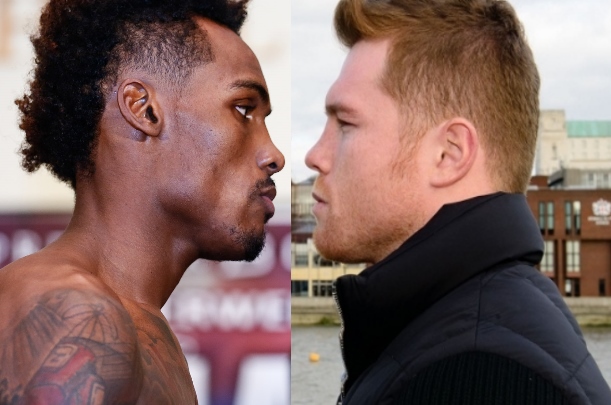 Canelo, on Saturday night, is heading up to the weight limit of 168-pounds to challenge WBA "regular" super middleweight champion Rocky Fielding at Madison Square Garden in New York City.

Win or lose, Canelo is expected to return to the middleweight division.

But even if he remains at 168, Charlo is willing to move up in weight to face him there too.

Charlo believes that he's a better fighter than Canelo in any weight class they decide to meet in.

"The mandatory means nothing in boxing anymore, so I have to take a different route," Charlo told Sky Sports.

"We are going to work it out and one day, me and Canelo will fight. He's challenging at 168-pounds, another division that's in my near future, and if Canelo chooses to campaign there, I will chase him up to 168-pounds and I can fight him there too.

"I'm bigger than him and better than him, it's just I don't have as many fights as he's had, but that means nothing. I am ready to fight him whenever. In any division, in every division. Canelo is the biggest name out there at the moment and I live in Dallas, where we fight lots of Mexicans and we're on the border with Mexico, so I've never been scared of fighting any Mexican fighter."

[QUOTE=j.razor;19352245]You want to pretend huh? You know he is the mandatory so he is in Nelo's lane, Triple L is scared to death of Jermall along with his trainer & fans, they SHOOK. He told Jacobs that they can fight…

[QUOTE=j.razor;19354240]If past & current Champions didn't then neither does Jermall. Jermall is the mando & that's all he needs to get the fight.[/QUOTE] And you are correct in what you are saying, the problem is we know how WBC play…

If you're better, why aren't you a superstar and Canelo is? You had the chance to prove it by fighting Jacobs, yet you act as if he doesn't exist and would rather fight leftovers.

[QUOTE=j.razor;19354955]Leave the Mexicans alone. This is a world that we share & should take care of.[/QUOTE] today I asked a messican what he thought of Roe vs Wade and he said hard to chose both are good ways to get…