NEW YORK – Getting knocked down Saturday night only made Duke Micah fight harder.

The bantamweight from Ghana got up from a third-round knockdown, floored Janiel Rivera later in the third and went on to win a unanimous decision in a 10-rounder on the Jermall Charlo-Dennis Hogan undercard at Barclays Center. Micah improved to 24-0 (19 KOs) by topping Puerto Rico’s Rivera (18-6-3, 11 KOs).

It initially seemed as though Micah would put away Rivera early, as he dropped him with a right hand toward the end of the first round. Rivera survived that trouble and knocked down Micah with a left uppercut with about minute remaining in the third round.

Micah quickly recovered, drilled Rivera with another right hand that sent him to the canvas less than 30 seconds after Micah went down. Micah remained in control thereafter, out-worked Rivera and defeated him on all three scorecards (79-72, 78-73, 77-74).

Earlier Saturday, Burley Brooks went the distance for the first time as a pro.

Brooks, a super middleweight prospect promoted by Errol Spence Jr., had knocked out each of his first four foes, none of whom made it out of the second round. Nathan Sharp went all six rounds with Brooks in the first fight on the Charlo-Hogan undercard, but he didn’t do enough to threaten Brooks’ unblemished record.

In the fight after Brooks beat Sharp, another Spence stablemate settled for a six-round split draw.

One judge scored Dallas-based welterweight Amon Rashidi a 59-55 victor over Puerto Rican journeyman Antonio Sanchez. Another judge had it 59-55 for Sanchez, though, and a third judge scored it even (57-57).

Rashidi (7-1-1, 5 KOs) fought for the first time since losing an eight-round unanimous decision to Alfonso Olvera (12-6-3, 4 KOs) on the Spence-Shawn Porter undercard September 28 at Staples Center in Los Angeles. Sanchez (6-8-3, 3 KOs) had lost seven of his previous eight fights. 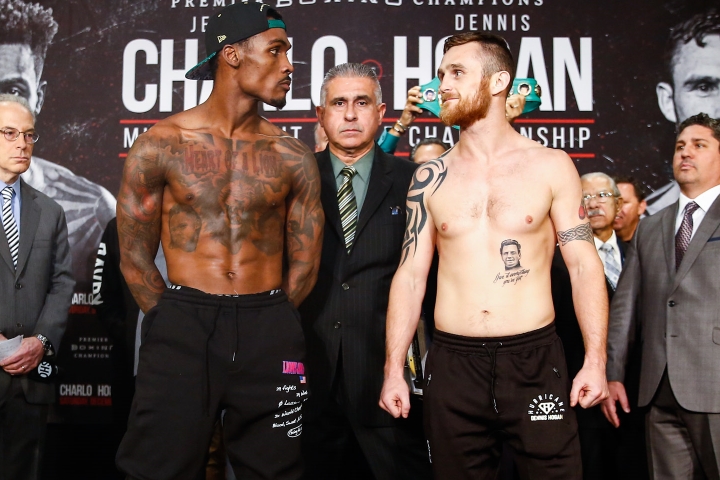