Charlo To Harrison: I'm Gonna Knock You The F--k Out!

ONTARIO, California – Jermell Charlo claimed in the immediate aftermath of his controversial loss to Tony Harrison that he’d pay closer attention to the selection of judges for their contractually mandated rematch.

“I’m gonna knock you the f--k out,” Charlo yelled at Harrison during an inevitably combative press conference in the main lobby of Toyota Arena.

Heidi Androl, FOX’s moderator, quickly followed up and asked Charlo if he feels he must knock out Harrison in their rematch due to the debatable result of their first fight.

Harrison has heard all this before, of course. Charlo predicted he’d knock him out prior to their fight last December 22 at Barclays Center in Brooklyn.

Charlo had developed into one of the 154-pound division’s biggest punchers prior to their initial encounter a year ago. Harrison had been stopped by Jarrett Hurd – the unbeaten IBF, IBO and WBA champ this time last year – and previously by Willie Nelson.

Charlo’s confidence seemingly was warranted against an 8-1 underdog. 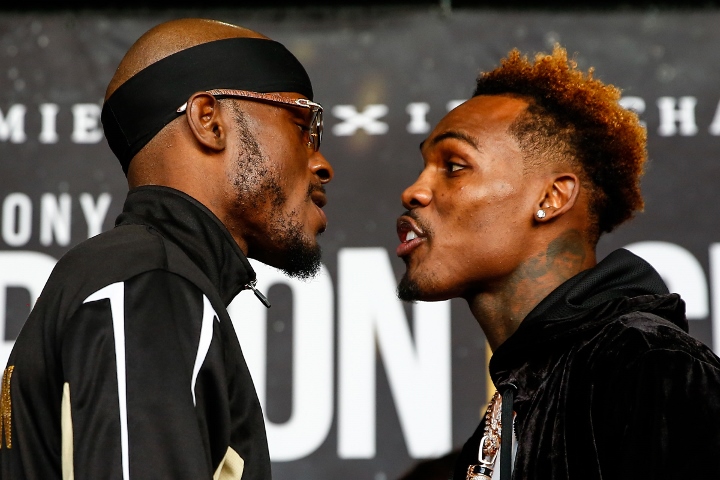 Harrison withstood Charlo’s power, however, and made the most of his second shot at a junior middleweight world title.

Once he had time to dissect his performance, Charlo realized he rushed himself too much versus Harrison. Charlo thinks he was trying too hard to knock out Harrison in his first fight after going the distance with former champion Austin Trout.

Houston’s Charlo (32-1, 16 KOs) had become accustomed to scoring spectacular knockouts like those he produced in back-to-back victories over Charles Hatley and Erickson Lubin in 2017.

Eventually, losing to Harrison had a positive impact on Charlo. It made him hungrier and more attentive to game plans.

In other words, Detroit’s Harrison (28-2, 21 KOs) expects Charlo to go head-hunting, which will help Harrison out-box him again.

Charlo caught Harrison with something, a left hook, in the 12th round last year. That shot seemed to hurt Harrison, who held and survived until the final bell.

Harrison both confirmed and disputed during the press conference that Charlo “rocked” him at times in their 12-rounder.

“You know what, man?,” Harrison said. “Like, the only people he can convince of that stuff is the people on his team. He had 12 rounds, never stumbled me, never rocked me.”

Charlo called out Harrison for being dishonest about what happened in their 12-round battle.

“He knows that power,” Charlo said. “He knows it. Them knees was all flapped all over the ring.”

Above all else, Charlo obviously wants to win back his title. That’d allow him to pursue a title unification fight against Julian Williams, who’ll make the first defenses of the IBF, IBO and WBA crowns he won from Hurd against optional opponent Jeison Rosario on January 18 in Philadelphia.

Charlo doesn’t want there to be any doubt about him avenging his only loss, which a decision win in at least a reasonably competitive fight could cause. Skepticism regarding his victory, according to Charlo, is the reason Harrison hasn’t really been embraced by boxing fans as a legitimate champion.

“This is professional boxing,” Charlo said. “This is not amateurs. We’re not here to score points. And some of the things that he did in the last fight, it didn’t satisfy the fans. And that’s why he’s not looked at like a pure champion. Even if he has the title, he doesn’t even get the recognition that he deserves because of the fact that he didn’t even come in and take it. And my job is to do what he should have done, and that’s to really come in, knock out the champion, take it from him and so I leave no doubts for you guys.”

The 29-year-old Charlo has no doubt following a tremendous training camp that he is prepared to take back the WBC belt from Harrison.

“I’m one of the fastest, hand speed-wise,” Charlo said. “I’m one of the sharpest IQ, ferocious power. Don’t know where it came from, just knock out a lot. I knocked guys out in this camp with 16-ounce gloves. And now I’ll put on some 10s and hit Tony, who’s been I know brain-shot already. We fittin’ to go knock him out. … I really wanna get him out of there just because I wanna prove [it] to the world.”

Harrison reminded anyone swayed by Charlo’s confidence that he has already proven he can take Charlo’s strongest shots.

“That’s him telling you what he think,” Harrison said of Charlo’s knockout prediction. “He said that sh-t before the first fight. Whatever he gonna say, he gonna say. Whatever his team is gonna do, they gonna do. He’s got two nights [left] to prove it to you and prove it to me.”

[QUOTE=Boxknowledge75;20268563]If you land the harder and more punches on only 4 rnds out of 12 rnds while the other guy controls the other 8 rnds with fewer total punches through out the fight. You still lose the bout 8rnds -…

Tony has real estate in Twin's head!! Should be a interesting sequel...I got Twin winning convincingly though

I favor Charlo but Harrison still in no slouch. It is a rematch so i expect Harrison to make adjustments from the first. He also packs some decent power of his own so Charlo needs to be mindful of that.

the hoe getting emotional again