Charlo Fueled By Vengeance, Eager To Put Hands on Harrison

A year’s time has made quite a difference for Jermell Charlo.

In December of 2018, while preparing for a title defense against Tony Harrison, the then-incumbent WBC 154-pound champion barely acknowledged his foe during a full-length interview.

And when he did, he wasn’t exactly showering the challenger – then ranked fifth and not long removed from a stoppage loss to Jarrett Hurd – with compliments.

“(Harrison) doesn’t get acknowledgement for losing from me,” Charlo said. “I’m not going to be honoring a guy that didn’t do what he had to do to beat a guy (Hurd) that I know I could beat. Tony Harrison is a guy that’s going to get in there and try to dethrone me and take my title. I’m excited for that. I’m excited to get in and be able to beat somebody without getting in trouble.”

Things didn’t go quite as planned.

Rather than going gentle into the Brooklyn night, Harrison worked his way through 12 full rounds and found himself on the winning end of a narrow but unanimous title-winning decision.

So it’s really no surprise that his enmity hasn’t lessened.

“I'm a passionate person,” Charlo said, in a recent PBC preview special. "I'm a winner. When they took that one from me, of course a passionate person is going to have a different reaction than he would have had. I found out where your heart was. I've been able to make more investment into myself to destroy you ever since then.

“I don't like 'phony' Harrison. It's easy to explain why the rematch will be different. I'm knocking him out. I can't let them judges make any decisions. That's what I need. He's going to sleep. Cold." 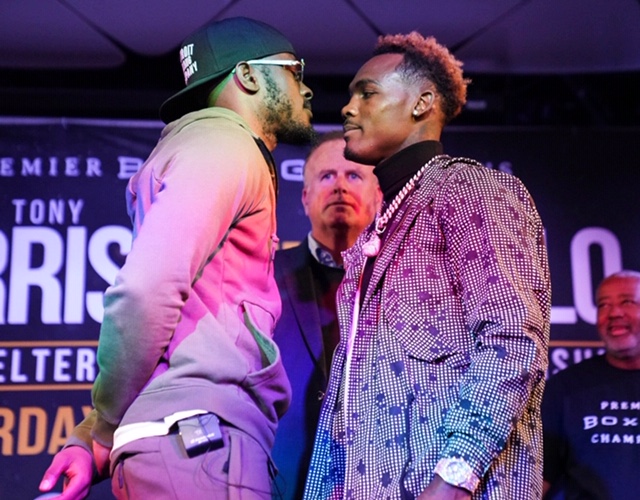 The return get-together was scheduled for the summertime but was scrapped at the last minute when Harrison injured an ankle and left Charlo to vent his frustrations on an overmatched Jorge Cota.

That fight ended in three rounds. Charlo, who suggests Harrison’s injury claim was dubious, said his engine was revved further by the new champ’s decision not to appear.

“He wasn't really injured, we're all boxers and we all go through things," said Charlo. "It's a wear and tear sport. It puts a lot on our mind and on our bodies. If you don't do it the right way, it's going to tear you down. Maybe he used the smallest excuse and used it to get him out of the fight. There's no easy routes in this thing. When you're at the top, you have to fight.

“He's a fraud. He manipulated the system and he isn't the real champ like I am. I'm the real champion and it will take me going in there and showing why I am the champ. I get to do that on December 21."

WBA “world” middleweight title – Kanagawa, Japan
Ryota Murata (champion/No. 5 IWBR) vs. Steven Butler (No. 8 WBA/No. 17 IWBR)
Why it’s trash: No one would suggest that Murata can’t fight. He’s shown that he can. But with a marquee champion like Canelo on the WBA roster and all the talent available elsewhere in the division, there’s simply no reason to consider this a title fight. It doesn’t warrant the billing or attention.

Harrison is living full time in Charlo's head. Boots on, tracking mud all up in that *****.

I hope Charlo can control himself and doesn't get KO'd trying to get Harrison out early. He needs to break him down and take the shot when he sees it.

[QUOTE=MC Hammer;20262862]Agreed. The homie told me, after watching 3 times, he saw how Harrison won. I said it shouldn't take 3 times, the judges only get one. Hell, i don't know how his fight with Trout was a majority decision…

[QUOTE=DougalDylan;20262876]Charlo fueled ... by all the drugs he took when he skipped test day.[/QUOTE] Did he skip a test? I get so confused these days trying to keep track of who takes them and who bails.

Charlo fueled ... by all the drugs he took when he skipped test day.