Charlo: Everybody Say Same Sh-t Until They Get In With Me

NEW YORK – Dennis Hogan hasn’t been knocked out as a professional prizefighter.

That’s about to change, according to Jermall Charlo. The unbeaten WBC world middleweight champion predicted again Thursday that he’ll stop Hogan inside the distance Saturday night at Barclays Center in Brooklyn.

The 34-year-old Hogan has moved up from 154 pounds to 160 for a shot at Charlo’s championship.

“I believe I have something to deliver to Hogan that he has never seen before,” Charlo said during a press conference in Brooklyn. “I’m almost back to my most explosive days in boxing, and I feel great about my training. Training went awesome. And just the way I prepared myself to get this win and this victory. … For sure, if I hit him, I’ll flush him.” 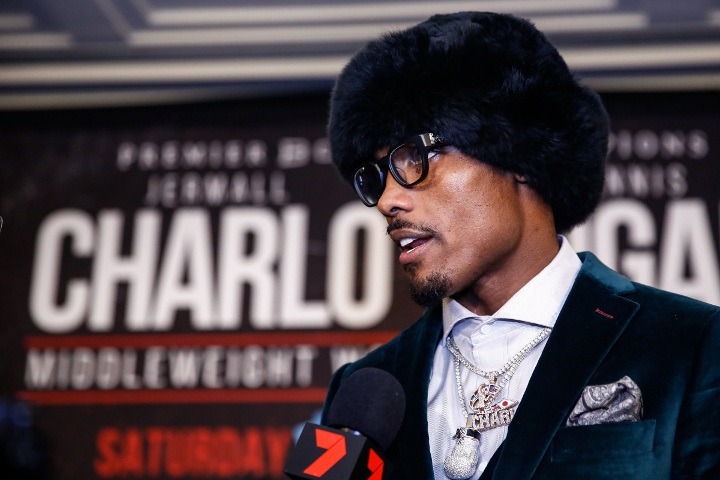 At 5-feet-8, Hogan stands four inches shorter than Charlo. The Irish veteran only has seven knockouts and therefore doesn’t seem like an opponent capable of truly hurting Houston’s Charlo (29-0, 21 KOs).

Hogan (28-2-1, 7 KOs) warned those underestimating him, however, to avoid becoming distracted by his low knockout ratio (22 percent).

“Every opponent that I have, everyone thinks they’re gonna knock me out,” Hogan said. “So, it’s like my coach, Glenn [Rushton] says, ‘It’s not how hard you can throw them, it’s how hard you can land ‘em.’ And I think that’s where people have had difficulty with me. And that’s certainly what I think is one of my best attributes. You know, I’m able to hold off fighters always. Once I land clean, people know that I mean business and they don’t tend to wanna come in as much. I’ve done that at super welterweight, when I was really dehydrated.

“And I can feel at least 20 percent extra power for middleweight. And I can land. I’m very, very accurate, and he’ll be feeling those punches. And whether he wants to come in and load up then is gonna be another story. But again, we’re both professional athletes. We’re gonna go out there and give the world a great fight. And one of us is gonna walk away with the WBC belt, and I truly intend it to be me.”

The 29-year-old Charlo claims that it’s Hogan, not him, that doesn’t realize just how tough of a task awaits him in the main event of a “Showtime Championship Boxing” tripleheader (9 p.m. ET/6 p.m. PT).

“He keep talking all that – he think he gonna be sweet,” Charlo said. “But I’m gonna show him when I get in there. Tall fighters, this and that. Man, stop all that. You number 30. You know that. You know you number 30. Merry Christmas to you. Happy New Years to you and your family, and that’s all you get. You coming to Brooklyn. You coming to my house, bringing your people to my house, to see what I got.

[QUOTE=j.razor;20233566]Stop the bullshet. He been surpassed pvssy-g. pvssy-g hasn't beat ANYONE. You know people ducking Mall too, stop acting. Don't bring "Lights Out" into this either cuz he is an ATG.[/QUOTE] Yeah, Charlos beat Williams and barely got by Korobov.…

Hogan hasn't had a KO for more than 5 years. And that was a DQ.. Against a guy that got KO'ed by featherfisted Sulecki. In round 1.

[QUOTE=j.razor;20233579]No one scared but you fake fans. Ya'll pretending like dude aint trying to fight. You scared fans need to stick to another sport that as soft as ya'll.[/QUOTE] Lol at you fanboy. Put your pom-poms down. Just saying. Dude…

[QUOTE=DaNeutral.;20232898]CHARLO, You are facing a 154lb fighter who lost his last fight at 154. NOBODY CARES ABOUT YOU. Give us a shout when you start acting like a Middleweight world champion and stop acting like a PBC chicken.[/QUOTE] He isn't…