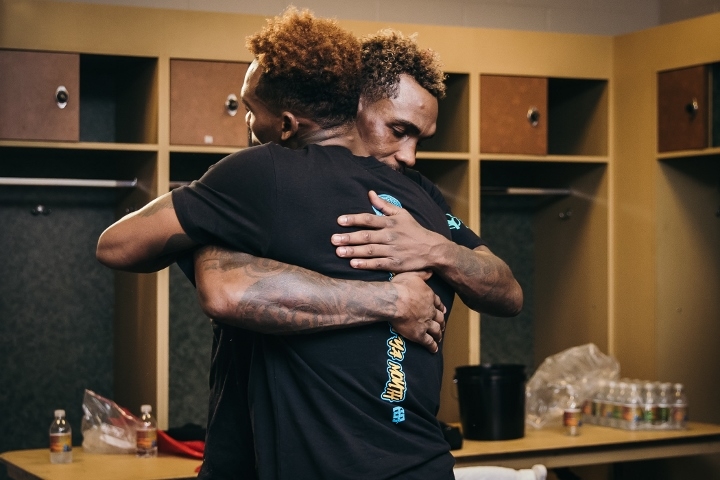 Jermell (34-1, 18 KOs) stole the show as he knocked out Rosario (20-2-1, 14 KOs) in stunning fashion just 21 seconds into the eighth round with a straight left jab to the body. Rosario struggled to get to his knees and appeared to have the wind knocked out of him as he was counted out by referee Harvey Dock.

After seven completed round, Jermell held a narrow lead on all three judges’ scorecards: 66-65 and 67-64 twice.

Jermell recorded two knockdowns before his knockout. In the closing seconds of the sixth round, Rosario from Santo Domingo, Dominican Republic, went down for the second time as Charlo connected on a short left hook that stunned Rosario, who was saved by the bell. Rosario was also sent to the canvas early as Jermell scored a knockdown on a left hook to the top of Rosario’s head in the first minute of the fight. Rosario was taken to the hospital for observation following the fight.

In the first card main event, Charlo (31-0, 22 KOs) remained undefeated in an all-out war against top contender Derevyanchenko as all three judges were in agreement in scoring the unanimous decision. The scorecards read: 116-112, 117-111, 118-110.

The 34-year-old Derevyanchenko (13-3, 10 KOs) fought more than half the fight with a swollen right eye he suffered in the fifth round, and later developed another cut above his left eye affecting his vision in the later rounds. He had his best rounds in the sixth and seventh as he connected on a several key left hooks that seemed to daze Charlo. The game and determined Derevyanchenko landed 180 and threw 681 more punches than any previous Charlo opponent.

I hope Jermall is on an upward trajectory. He can’t fight nobodies for 3 years, finally fight someone with a pulse, and then go back to nobodies again. I wonder if there’s any chance of an Undisputed championship fight for…

[QUOTE=Oldskoolg;20784624]Bro, you’re talking to a disordered mental patient there. The child is here to argue with grown men[/QUOTE] Oh yeah it’s thug life posters like yourself whom cried in those LDBC threads. You guys are consistent. ;)

[QUOTE=BLASTER1;20784653]Doesn't everyone get the full fight for free about 12hrs at the most 8n YouTube? If i cant catch the ppv live i can always watch these fights the next day on YouTube.[/QUOTE] YouTube is garbage. They always upload choppy…

[QUOTE=champion4ever;20784425]How long is its duration? 30 days? DAZN is an online subscription service through an app. It's not an online product. Therefore you cannot own the fights outright like you can on a Pay Per View event on a linear…

[QUOTE=Oldskoolg;20784624]Bro, you’re talking to a disordered mental patient there. The child is here to argue with grown men[/QUOTE]Yes, I've noticed that. I just like to have fun with him from time to time since most posters have him on their…