Charlo: Canelo Will Try 160 Again; I Want That Fight To Happen

Even after knocking out Sergey Kovalev in their light heavyweight title fight last month, Charlo expects the Mexican superstar to return to 160 pounds. If Alvarez moves back down from 175 pounds, Charlo hopes he finally can land that career-defining fight sometime in 2020.

Charlo discussed the high-profile fight he wants above all others following a press conference Thursday in Brooklyn for his WBC middleweight title defense Saturday night versus Dennis Hogan.

“I think Canelo’s gonna try to make 160 again,” Charlo told BoxingScene.com. “Hopefully, I can grab his attention after this fight and maybe be able to do some spectacular numbers with him. I want that fight to happen.” 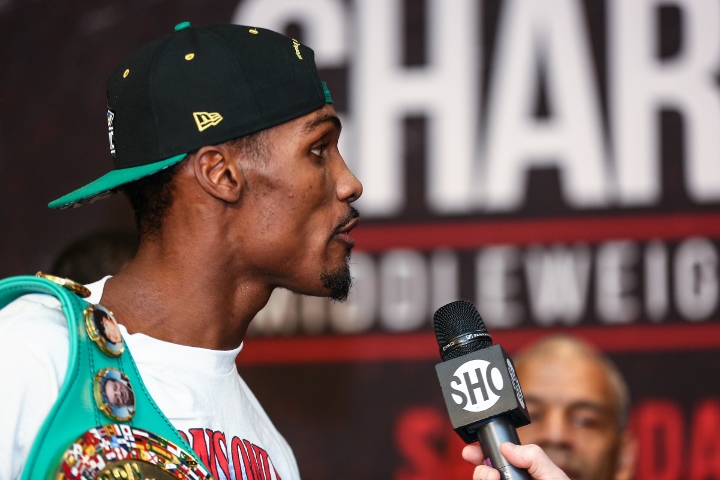 Houston’s Charlo (29-0, 21 KOs) would consider moving up to the super middleweight maximum of 168 pounds if it meant squaring off against Alvarez (53-1-2, 36 KOs). The 29-year-old Charlo would prefer, however, to face Alvarez at the middleweight limit.

Charlo was the WBC’s mandatory challenger for Alvarez until that sanctioning organization strangely announced late in June that it had elevated Alvarez to the unprecedented, ambiguous status of franchise champion. In a corresponding move, the WBC promoted Charlo from its interim middleweight champion to world middleweight champ.

The 6-feet Charlo would own a four-inch height advantage over Alvarez, but Charlo hasn’t weighed in at more than 160 pounds for a professional fight. The 5-feet-8 Alvarez weighed in at a career-high 174½ pounds for his light heavyweight debut versus Kovalev.

“I kind of thought he would knock Kovalev out,” Charlo said, “but I didn’t think it would take that long.”

In the meantime, rematch korobov.

No you don’t Charlo - you want the payday. If you were so keen on fighting the best you’d be banging on Andrade, Golovkins doors.

Canelo will establish a new "Canelo Weight" at 163 or 164. The WBC will enable him. "The Franchise Champ gets to decide what weight he wants to come in at." There will be a new belt designed for the occasion.