Cesar “Corazon” Juarez has fought twice for a world championship coming up short on both occasions, first against Nonito Donaire in 2015 in Puerto Rico and then against Issac Dogboe in 2018 in South Africa, both times it was for the World Boxing Organization junior (WBO) junior bantamweight belt.

Juarez (23-6, 17 KO’s) of Mexico City will try to get one step closer towards a third opportunity when he takes on former world-champion Ryosuke Iwasa (25-3m 16 KOs) of Japan in an International Boxing Federation (IBF) eliminator bout this Saturday at the Microsoft Theater in Los Angeles with the winner in line to fight the world champion TJ Doheny of Australia.

“I want to be a world champion and I will continue to work hard to become one. I closed against Donaire and never got the chance to really show my stuff against Dogboe a fight that was stopped too early,” said Juarez who has won his last three fights, two of them by knockouts. 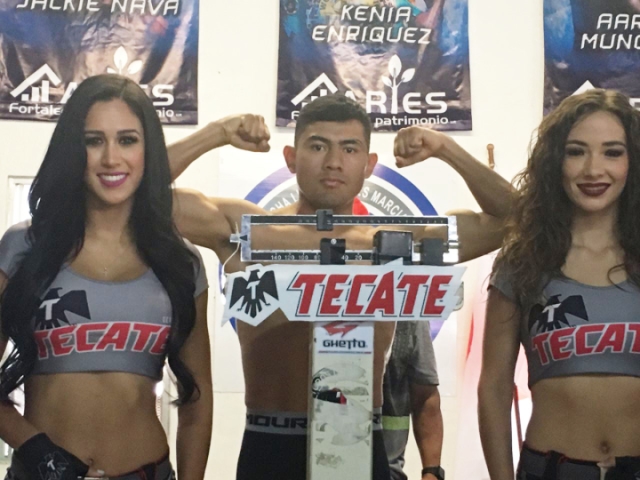 Juarez is a warrior and who will risk it all to win it all every time he steps into the ring and that is what he was doing on January of last year in his championship fight against Isaac Dogboe in the Bukon Boxing Arena in Accra Ghana when after having been dropped twice, referee Tony Weeks called the fight off in the fifth round.

“I was knocked down, but not hurt. I always take risks in the ring and I get caught sometimes and go down, but it was early in the fight and I felt that the stoppage was too early. In my fight against Nonito Donaire I was down twice in the fourth round, but came back and came close to winning the fight,” said Juarez.

“Donaire tired himself out in the first half of our fight and Dogboe was going to do the same thing and that was going to be my chance to win the fight and the WBO belt. Donaire because of his great experience was able to withstand my attack in the last couple of rounds, but I knew that Doboe would not be able to do so. Weeks took away my opportunity with his quick stoppage,” added Juarez.

After four hard rounds in what was turning into a classic war, Juarez was knockdown of the second time in the fight in the fifth round, after going down in the second. Weeks just stopped the fight after Juarez got up, never asking him if he was okay or even giving the opportunity to walk towards him.

“Weeks never gave Cesar the opportunity to show he was okay, he just jump on him and stopped what was going to be a war to remember just like the fight with Donaire was. Cesar is a warrior who is willing to take shots to deliver his. It was a typical Juarez fight, until Weeks stopped it,” said Sean Gibbons, Juarez advisor who was ringside in Africa.

When Juarez stopped big favorite Albert Pagara in 2016, Juarez was knockdown in the first round and only got stronger and better from there in route to a dramatic KO victory in the eighth round.

“I went down but I also got up and came back stronger, the knockdowns only got me more motivated to step up my game, too bad Weeks never took the time to research my history and did not know what I am capable of doing in the ring. Lack of knowledge on Weeks part really hurt me on that night against Dogboe,” said Juarez after the fight.

“I know I have a tough task in front of me this Saturday. Iwasa is a former world-champion, who wants to become one again, but all I ask is to be given a chance to do my work all 12 rounds, I expect a war, but I also expect a win tomorrow,” said Juarez.