The feeling is mutual regarding Charlo’s most recent victory. Centeno can’t understand why it took Charlo so long to stop Jorge Sebastian Heiland, who was already bothered by a leg injury when the Argentinean contender entered the ring for their July 29 fight at Barclays Center in Brooklyn.

“With the talent that Jermall has,” Centeno told BoxingScene.com, “I would’ve thought he would’ve finished the fight a lot faster, especially with his opponent being hurt.” 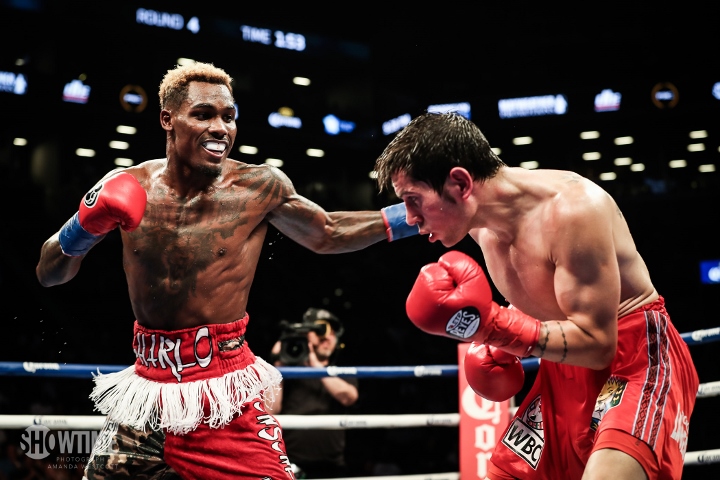 Centeno is confident he’ll give Charlo a much tougher fight Saturday night when they square off for the WBC’s interim middleweight title at Barclays Center.

Houston’s Charlo (26-0, 20 KOs) is listed by several Internet sports books as a whopping 50-1 favorite over Centeno (26-1, 14 KOs, 1 NC). Unlike Heiland, however, Centeno will come to the ring completely healthy.

“You could definitely tell [Heiland] wasn’t completely there,” said Centeno, whose rib injury caused this fight to be postponed from March 3 until Saturday night. “It was a pretty bad injury and I was surprised the commission didn’t touch on it. It must’ve been to collect a check. I wouldn’t see another reason.”

The injury to his left leg hobbled Heiland almost immediately in what was scheduled to a be a 12-round WBC middleweight elimination match. Charlo knocked him down once apiece in the second and fourth rounds.

There were points during that farcical fight when Heiland (29-5-2, 16 KOs) couldn’t even stand up straight. Though not at all Charlo’s fault, Heiland’s injury took away from the undefeated contender’s win in his middleweight debut.

Heiland hid his injury from the New York State Athletic Commission and everyone else involved in the promotion during the buildup toward their fight.

He came to the ring with a lot of tape around his left knee, which his corner men indicated was from an injury suffered during training. NYSAC officials made them remove the tape before the fight started.

Even healthy, Heiland was a huge underdog against the hard-hitting Charlo.

“[Heiland] seemed to show up to the fight injured,” Centeno said. “He was really just there to collect a paycheck. A lot of people are saying, ‘Oh, well Jermall is the uncrowned king at 160.’ And it’s kind of hard to crown him at 160 because he just got there. I mean, he was a great fighter at 154. But he really hasn’t fought anybody at 160 yet.”

Showtime will televise Centeno-Charlo as the second of a three-bout broadcast set to begin at 9 p.m. ET/6 p.m. PT.

Centeno got knocked out in front of his baby :(

Centeno is not wrong, however, I'm confident Charlo beats him tonight.

Problem is delaying the fight due to Centeno rib injury only hurt him. He weighed in at 158 pounds, looked incredibly skinny and underweight. I think Centeno will be way to weak to handle Jermall come fight night.

I’m still on the fence about dropping a C note on Centeno. Thing is, not sure Centeno would get the decision even in the unlikely event that he earned it