Cem Kilic: 2020 is The Year When I'll Become World Champion

Cem Kilic is not a “new year, new me” kind of guy. But as 2020 begins with an ESPN-televised co-main event bout against fellow unbeaten Steven Nelson, the super middleweight contender does look at the coming 12 months as one that will be life-changing.

“I’m not really a new year’s type of person, but 2020 feels like it’s the year,” he said. “It starts off pretty good and I feel like this is when I’m gonna make it to the next level.”

Already ranked in the top ten by the WBA, Kilic has more than enough champions to choose from when it comes to that sanctioning body, but that’s really not the point, is it? It’s about getting to the top, getting that title fight and raising a belt not just for himself, but for Turkey, a place that has not exactly been a champion-producing factory.

That’s something the Germany-born Kilic hopes to change, and it’s been his goal since the start.

“That’s the main reason why I moved to the U.S.A.,” said Kilic. “I was only 19 years old. But the first day I started boxing, I was 12, 13 and since the first day I went to the boxing gym, I told myself I want to be fighting in the U.S.A. when I was professional. Muhammad Ali and Mike Tyson were my role models and the biggest opportunities for boxing were in the U.S.A. because boxing was big here.”

It was a move that obviously makes a lot of sense if you look at where Kilic is today, but when he arrived here six years ago this May, it was a risk and a huge adjustment for a teenager living in Los Angeles.

“The biggest adjustment was the culture,” he said. “It was a culture shock, especially since I live in Los Angeles. (Laughs) There’s nothing that reminds me of home.”

Nearly six years later, he’s adjusted to his adopted home, but he still makes it a point to go back to where it all began after almost every fight in order to see his family. The exception was 2019, as he wasn’t able to make it to Germany. But he’s already preparing a post-fight trip that will make up for it, as his family will come into Atlantic City for Saturday’s bout, then go to New York and Philadelphia before going back to Germany. And there, life is a lot different for Kilic than it was when he left.

“I’m like a star in Germany now,” he said. “I go home, they recognize me on the streets, and people that I don’t even know tell me that they’re proud of me. It’s a great feeling because they recognize you and you know you’re doing something good for your country.” 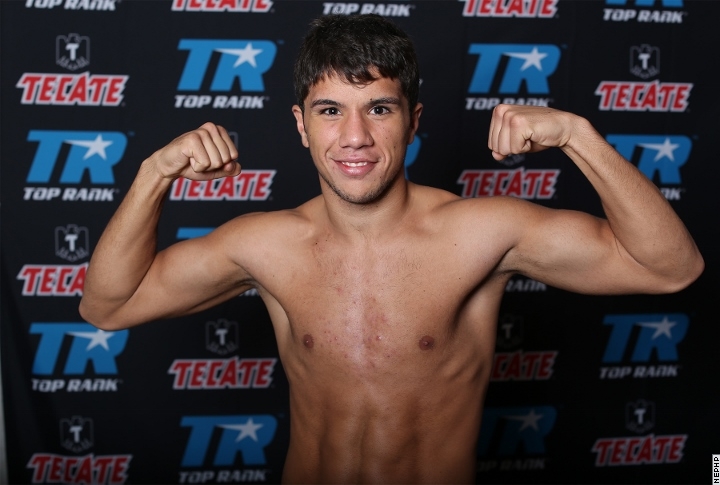 That’s a lot to put on the shoulders of a 25-year-old, but Kilic is handling it well, doing whatever’s necessary to pay the bills and improve his craft with each fight. That includes a first-class education from trainer Buddy McGirt and sparring sessions over the years with a Who’s Who of the sport that includes names like Miguel Cotto, Jermell Charlo, Sergey Kovalev, Shane Mosley and Errol Spence Jr.

So where has he learned more, in the gym or in his 14 pro fights?

“It’s a 50-50 thing,” he said. “I sparred Cotto when I was 20 and that was a great experience. Then when you get in the ring, you might not fight someone as good, but the gloves are smaller and there’s a lot of people watching, so there’s a different type of experience fighting in an actual fight. I’ve seen a lot of fighters doing so good in sparring and then they lose to guys who are 2-15.”

Kilic can’t afford to leave his fight in the gym. Not now, especially when he’s so close to where he’s wanted to be. But when it comes to high-profile gigs like this weekend’s bout with Nelson, that’s where he feels he shines the brightest.

“This is televised and everyone is watching,” he said. “Even back home people are watching and there’s a lot more to prove than there is in a normal event. But I like that pressure. I fought on Showtime and I’m used to it, so it’s nothing new to me. I know what’s expected of me.”

What’s expected is the kind of excitement he’s brought in his best wins over Joe Amouta, DeAndre Ware and Martez McGregor, and with McGirt smoothing out the rough edges, a win over Nelson would be a major boost for his career, especially if he can stop the stablemate and good friend of Terence Crawford in the process. Nelson will be a tough nut to crack, though, and at 31, the Nebraskan has to know that the time is now for him to make a move. That’s a reality not lost on Kilic.

“They always say age is just a number; it’s not just a number, especially in sports,” he said. “You get older and you’ve got to accept that. And when you’re 31 years old, most people retire when they’re 36, so he’s only going to have five years and that puts a lot of pressure on him. It’s also in the head. You know you’re getting older. You just know. And it stays in the back of your head.”

I remind Kilic that he won’t be 25 forever. He laughs, well aware of such a fact.

“When I was 20, I recovered from training so much faster,” he said. “I would train, go home and do whatever. Now I can actually feel it. When I leave the gym, I just want to go home and rest.”

He laughs again, knowing that it’s all part of the process and the plan. And he’s prepared to follow that plan patiently until it’s time for it all to come together on the biggest stages of the sport. And like any 25-year-old, he wouldn’t mind if it happens sooner rather than later. But he’s also willing to wait. Just not too long.

“I’ve got to stay patient because I want to become world champion and make history,” he said. “I get a lot of support from my homeland, and all their messages and that support keeps me motivated and patient. But 2020 is the year when I will become a world champion. I want to fight for the championship belt this year.”

Ranked top 10 by the WBA huh? Does that mean he's fighting for the semi-regular, a little regular, regular, very regular, super regular, or beyond regular belt?...

he is NOT as star in Germany!! he is completly unkown. what a deluded liar!