Ceja Files Protest With WBC Over Stoppage Loss To Rigondeaux

After being given just eight seconds to unsuccessfully plead with referee Russell Mora to allow his last fight to continue, Julio Ceja will be granted at least the next few days by the World Boxing Council to argue his case for reconsideration.

The former 122-pound titlist has filed an official appeal with the WBC on the grounds that his June 23 clash with lineal super bantamweight champion Guillermo Rigondeaux was unjustly stopped.

Ceja was winning on all three scorecards heading into the 8th round of their WBC-sanctioned title eliminator at Mandalay Bay in Las Vegas, Nevada. Cuba’s Rigondeaux turned the tables in a big way, flooring the Mexican boxer with a single straight left hand. 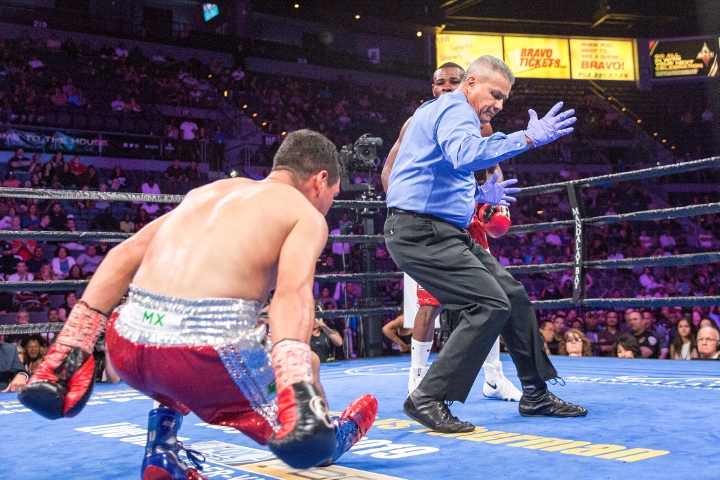 A mandatory eight-count was administered, to which Ceja acknowledged while on his feet and even followed the instructions issued by Mora in order to be permitted to continue. To the disbelief among those in attendance as well as those watching at home live in primetime on free-to-air Fox, the contest was instead waved off.

The win earned Rigondeaux the distinction of being named the official mandatory challenger to the winner of the July 13 WBC title consolidation clash between unbeaten “Full” titlist Rey Vargas an “interim” titleholder Tomoki Kameda.

Hope among Ceja’s side is that full reconsideration will come of his appeal by that point.

“Guillermo Rigondeaux is the official mandatory challenger,” noted Mauricio Sulaiman, president of the WBC. “However, the request of Mr. Julio Ceja will be addressed.”

The best case scenario for Ceja is that the fight is ruled a No-Contest, although that would have to ruled as such by the Nevada State Athletic Commission, who oversaw Sunday’s event. That would require a separate protest filed directly with the commission.

As it relates to the WBC, all that can be done is for a rematch to be ordered in redetermining the mandatory challenger. Given the sanctioning body’s stance on fighter safety, Ceja could find himself swimming upstream on this one.

“The chief goal of the World Boxing Council is to always safeguard the integrity and well-being of boxers, in order to avoid any tragedy,” points out Sulaiman.

The ugly side of the sport’s politics resulted in collection of alphabet titles being stripped in 2015, while maintaining championship lineage among historians who track such events. Assuming Sunday’s result holds up, it will mark his 6th successful championship defense.

Barring a surprise overturned verdict in his favor, Ceja (32-4, 28KOs) will be sitting on back-to-back unlucky stoppages. He was well in control through four rounds countryman Franklin Manzanila before a broken nose forced a stoppage prior to the start of round five in their WBC-sanctioned clash last May.

[QUOTE=The_Hamster;19859031]I do think it was a quick stoppage. He was doing well in the fight and it was actually somewhat of a sudden [COLOR="Red"][B]flash knockdown[/B][/COLOR] and he got up quickly. I don't see what else he could have done to…

It was obvious bs. Reminds me of that Berto/Lopez stoppage

[QUOTE=-Kev-;19859350]I will take a refs word over a ringside doctor on whether or not a fighter can continue or not. The ref has to initiate a check up on a fighter, for the ringside doc can check on him. I…

[QUOTE=Loque-san;19858693]The chances of such a protest being successful are slim to none. Russell Mora had a decision to make, he thought Ceja was badly hurt and stopped the fight. It's a judgement call. There is no glaring mistake, like a…

I thought it was stopped early and Since it was the end of the round give Ceja the minute to gather his sh.it but.... Ref probably made the right call. I mean Ceja didn’t even complain when it was called…