Back on September 25 in Tijuana, Cazares won a six round technical unanimous decision over Chavez Jr. in a light heavyweight contest.

Chavez Jr, a former WBC middleweight champion, claimed that he was unable to continue due to a cut over his left eye, that he said was caused by a clash of heads. Cazares strongly believes the cut was caused by a legal punch.

Either way, the referee sent the fight to the scorecards - and Cazares was ahead on all three tallies. 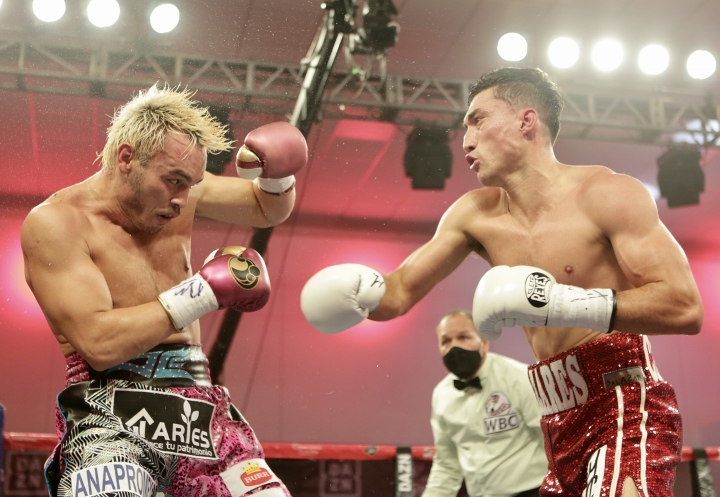 After the fight was over, Chavez Sr, a former world champion in three different weight divisions, tried to attack Enrique Covarrubias, the legal representative of Cázares.

Covarrubias was apparently screaming and celebrating Cázares' performance, which annoyed Chavez Sr, who pounced on the lawyer with the intention of hitting him, but he was restrained by people who were nearby.

"When the fight was over I went to go see my representative who was down there [at ringside], but he was very busy because Chávez Sr. launched at him and wanted to hit him... he was frustrated by the fight, by the result and well, it was a shock, because there were many people who did not give me a penny of a chance to get the victory.

"We went up against everything, because we climbed up to a weight division that was not mine,  I am a natural 168-pounder. I really don't understand [the attitude of Chavez Sr], I feel very sad. Throughout the show I received a lot of ugly rudeness, which I don't want to mention here because God punishes us in a polite way. My representative was giving me positive and well-educated encouragement."

According to Cázares, at the end of the fight he was congratulated by Mauricio Sulaiman, president of the World Boxing Council (WBC).

At the moment, Chavez Jr. has not asked him for a rematch.

"The truth is we are not interested in a rematch, with someone we have already turned back," said Cázares.

[QUOTE=Califire209;20803020]I don't know about all that Homie don't be calling Chavez Sr a coward. If you read the article you will see that he had no need to attack Cazarez it wasn't him who was laughing like an idiot[/QUOTE] he…

[QUOTE=budfr;20796509]Yes, we know Chavez Jr doesn´t take boxing seriously but in this fight Cazares was ramming him all night and employing dirty tactics. It was a headbutt.[/QUOTE] Nonsense. One headbutt in the second round, after that it was Jr throwing…

[QUOTE=Rick Taylor;20797262]Coward didnt have the balls to try it with cazares directly because he knew hed get beat up and humiliated just like his son did. So instead he tried to pick on an easy target. what a pathetic old…

So if it was a punch that caused the cut,.he wins by TKO. If it was not a punch but a head butt,.he.wins by UD. Translation: He won this fight coming and going. No need for a rematch. Move along.…

[quote=boxingfanatic75;20797756]notice as well he always surrounds himself around an entourage. This way his drunk a$$ can mouth off to anyone he pleases and not have to worry about having 10 guys in backup. I’d imagine after awhile that’ll start chipping…