Castano: If Lara Wants The Rematch, He Knows I'm Ready

Brian Castaño was disgusted enough with the politics involved to have given up one belt.

Don’t mistake that for his being done with the junior middleweight title picture altogether.

The unbeaten Argentine took an important step towards returning to that very stage following a 5th round injury stoppage of Wale Omotoso. The FS1-televised headliner—which aired Saturday evening from MGM National Harbor in Oxon Hill, Maryland—marked Castaño’s first ring appearance since relinquishing his secondary title earlier this summer after withdrawing from a mandated rematch with France’s Michel Soro.

“I’m still a world champion, as far I’m concerned,” Castaño (16-0-1, 12KOs) told BoxingScene.com. “I never lost my title in the ring, but am ready to put another (belt) around my waist if that will prove I’m the best (junior middleweight) in the world.” 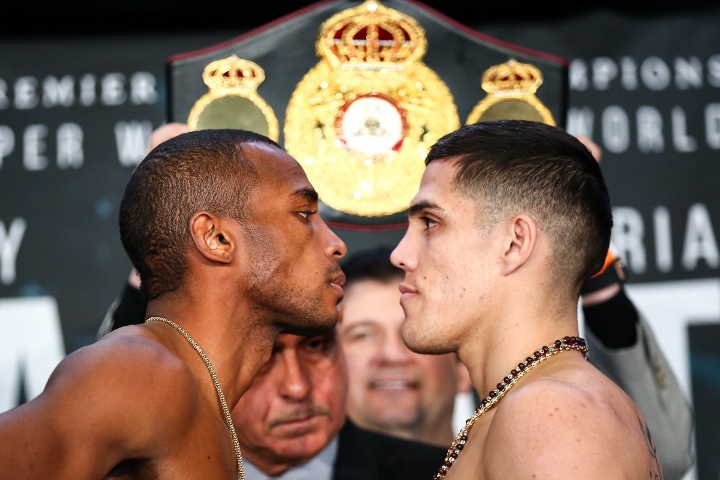 Castaño’s reign—which began with an interim title win in Nov. 2016—came to a disappointing end, largely in part to not wanting history to repeat itself. A July 2017 win over Soro in France was followed by months of litigation just in order to receive his contractually promised compensation for the fight. A guarantee was sought ahead of their rematch which due to take place in July, along with assurances of random drug testing in place.

Soro’s team failed to deliver on both front, but it was Castaño who ultimately paid the price as he was ordered to hand over his title, which he last defended in a 12-round draw versus Erislandy Lara this past March.

In an odd twist of fate, Lara is now in possession of said belt, which he claimed following a knockout win over Ramon Alvarez this past August. With unfinished business already in place stemming from their stalemate earlier this year, there’s now even greater cause to pursue a return bout.

“There aren’t any official negotiations or talks with (Lara’s team) right now, but of course I would love to fight him again,” Castaño told BoxingScene.com and other reporters following Saturday’s win. “If Lara wants the [rematch], he knows I’m ready.”