Castano: I Know I Beat Lara, I Feel I Was Robbed, I'd Do Rematch 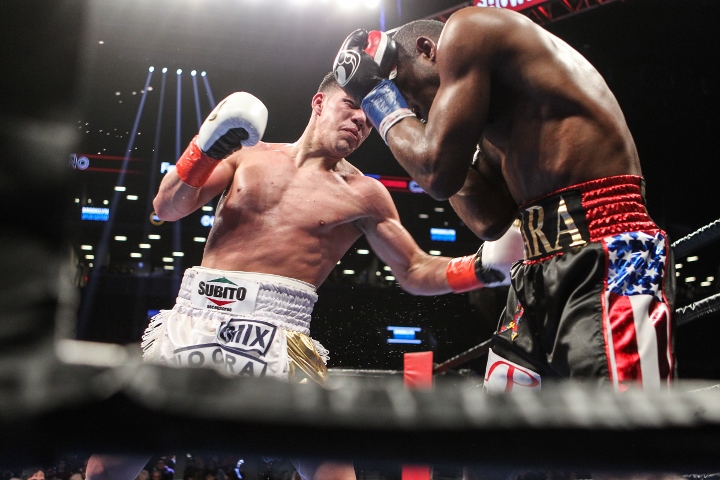 In the close, difficult-to-score fight, five of the rounds were separated by three or fewer connects and three of those rounds favored Lara. In the final two rounds, Castaño ramped up the pressure and connected on 44 punches, while Lara landed only 24 punches across the championship rounds. Castaño won the final three rounds on all three judges’ scorecards. Without doing so, the Argentine would have lost his belt.

After the hotly contested fight, both fighters have options, including a rematch, in the talent-rich super welterweight division.

“I know I won the fight. I feel I was robbed,” a disappointed Castaño said.

In the co-feature, Cuban heavyweight slugger Luis Ortiz (31-1, 26 KOs) earned a unanimous decision victory over a game Christian Hammer (24-6, 14 KOs). Although the judges scored the fight 100-90 and 99-91 twice, both men fought through bloody noses at different points in the fight and both were stunned in a back-and-forth second round.

[QUOTE=Nusky;19556768]So tired of these fighters saying they got robbed. One of the most overused terms in all of boxing. It was a draw and you got to keep your meaningless belt. FOH[/QUOTE] Amen just said same thing it was a…

[QUOTE=Letmaku;19557046]Remember- Pacman landed 180 vs. Horns 90 only. Boxing is now the most corrupt but lucrative business in the world![/QUOTE] You cant just reley on punch stats alone to prove your point.You do know that its just two guys counting…

[QUOTE=Greenfield02;19555964]It's Bull how fighters use the word Robbery in a close fight. No Robbery, just a close fight. Robbery should only be used when you beat the crap out of your opponent for 12 rounds and don't get the decision.…

[QUOTE=kushking;19556032][I][B] To everyone who says Lara won how do you explain these stats? & don't say compuboxs inaccurate because its dead on Lara wasn't doing anything most the fight besides killing the action..[/B][/I] To greenfield02 I ask you is outlanding…