Argentine star Brian Castano is getting ready for a new opportunity, after he decided to vacate his World Boxing Association (WBA) super welterweight world title after a planned bout with Frenchman Michel Soro fell apart.

Now Castano seeks to relocate his position on the world stage - with a fight on October 28 in Los Angeles against hard puncher Wale Omatoso.

One of the names on Castano's hit list, is WBO junior middleweight champion Jaime Munguia.

"He hasn't fought with anyone ... To be a star you have to fight with the right name, with the champions of the division. He's a strong, fierce boxer I haven't seen that they tested him with anyone of a high caliber to see if he's right where he needs to be," Castano said to Radio Colonia.

"He is not bad, he is a great boxer, he is strong, he has youth, but he hasn't been hit yet by someone on his level. I would like to fight him because of the style he has. The Mexican fans would like to see the fight." 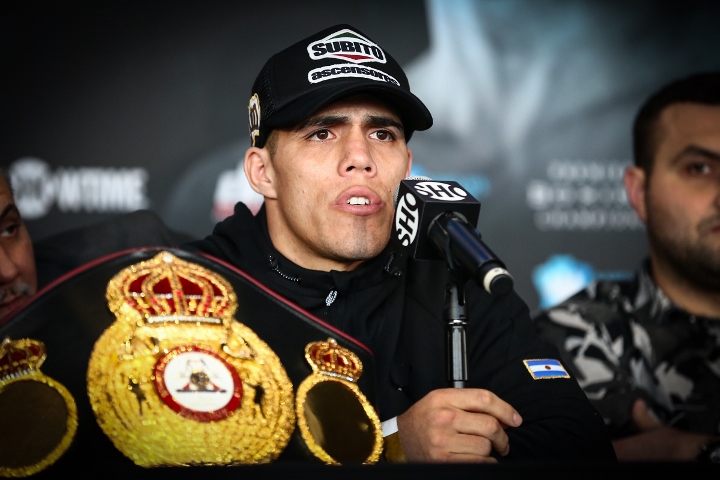 Castano is ready to face anyone, but says there are issues in securing any of the needed names.

"At this level we already want to look for good fights. Sometimes they do not happen, sometimes they fall through. We really want to fight against those who are up at the top. We are aiming at Jarrett Hurd , (Tony) Harrison , (Julian) Williams , Munguía, (Jermell) Charlo ... But hey, it's getting complicated today, they're avoiding us."

The 29-year-old Argentine is a division lower than Canelo Alvarez and Gennady Golovkin, but he also does not lose hope of one day facing them.

"I would love it. Honestly today is seems like they are far away, but they are right here . They are boxers just like me... physically a little bigger. When you get into the ring you can expect anything to happen. We want to fight with the best to show where we stand! If there is a title in between, that's even better. To continue collecting belts is what you dream about in a lifetime. Hopefully the fights that come are for titles," Castano said.

You claim everyone is avoiding you but you just vacated the WBA title that would have made you mandatory for Jrock. These guys are so full of shieet sometimes!

[QUOTE=Bronx2245;20046109]Wale won't be a cake walk for Castani, but Castano should win! I'm still hoping for J-Rock vs, Lubin or Lara![/QUOTE] Yes forgot about Lubin...would like those fights as well

Wale won't be a cake walk for Castani, but Castano should win! I'm still hoping for J-Rock vs, Lubin or Lara!