Castaneda: Everybody Thinks I Suck At Boxing; Can't Wait To Show World What I'm About

Boxing hasn’t been profitable enough to become his sole source of income since Castaneda turned pro in October 2012. For about six hours each morning, starting at 4 a.m., Castaneda loads and unloads trucks at a FedEx facility in his hometown of San Antonio.

“I’ve been a package handler for the past five years,” Castaneda told BoxingScene.com. “I’ll load one to two 18-wheelers, or I’ll unload three or four every morning. Five days a week, no matter what. And I’m sweating. I’m busting my ass moving weight. I can say I’ve moved more weight than ‘El Chapo,’ but the righteous way, the American way.” 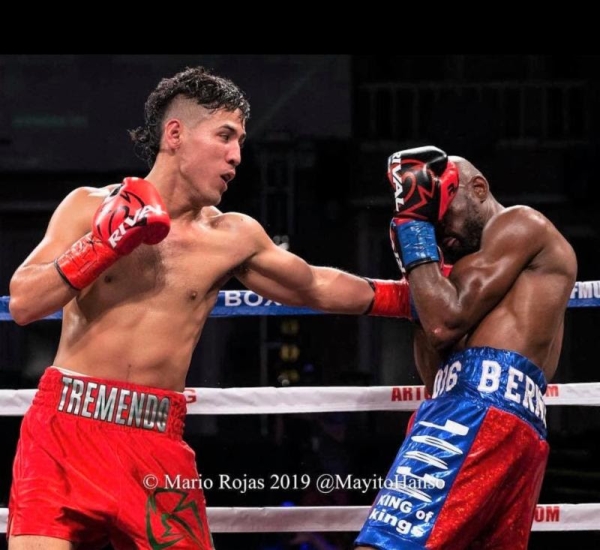 Unlike the infamous Mexican drug lord, the 26-year-old Castaneda intends to make headlines for the right reasons Tuesday night in Las Vegas.

“It’s a great opportunity to pursue my [lifelong] dreams,” Castaneda said. “I just have to capitalize and come out victorious. I know it’ll be difficult against a great, outstanding boxer. But I’m ready for these types of fights. I’m ready for all the great challenges in the boxing ring, and I feel I can come out victorious by giving Zepeda a tough, rugged fight.”

He didn’t hesitate to take this challenging assignment on such short notice because he had been training for a fight against Julian Rodriguez (19-0, 12 KOs) that Castaneda initially expected to take place Thursday night. The Rodriguez bout was pushed back to an undetermined August date, but Castaneda felt this ESPN main event was an opportunity he couldn’t turn down.

Castaneda suffered his first professional loss in his last fight, four months ago. Puerto Rico’s Yomar Alamo (18-0-1, 12 KOs) beat him by majority decision in their 10-rounder February 28 in Kissimmee, Florida.

“It was just simply an off night,” Castaneda said. “That’s all it was. I actually like that I suffered that defeat because it exposed me to be kind of a tough, rugged fighter that is one-dimensional, when I’m really not one-dimensional at all. I just had an off night and I just take that fight as a publicity stunt to fool everybody into thinking I suck at boxing. And [Tuesday] night is redemption. I can’t wait to show the world what I’m really about.”

The confident Castaneda senses Zepeda, a southpaw from La Puente, California, is underestimating him because of how he fought against Alamo.

“So, I just chased him around and let him run, and score punches on me, because I just felt completely off. It is what it is. I took an ‘L,’ even though a lot of people thought I won the fight. I won the fans over. I won the Puerto Rican fans over. But [Tuesday] night, I plan on displaying my full-dimensional skills I have inside that boxing ring. He’s a great fighter, and I can’t wait to display my skills against one of the top dogs in the sport of boxing at 140 pounds.”

Zepeda-Castaneda will headline what will be at least a four-fight ESPN broadcast from MGM Grand Conference Center. The show, which will start at 8 p.m. ET/5 p.m., also will feature junior lightweights Andy Vences (23-1-1, 12 KOs), of San Jose, California, and Luis Alberto Lopez (20-2, 11 KOs), of Mexicali, Mexico, in a 10-round bout.

[QUOTE=Kannabis Kid;20647012]Short notice but not like he wasn't training article clearly said he had another fight lined up. I'm not saying he is going to win but people be ****ting on these fighters when they are at least stepping up…

[QUOTE=indelible;20646932]This guy got outworked by Alamo and took a fight on short notice and believes he’ll beat Zepeda because?.... Yeah no. You’re getting stopped mid to late rounds. Zepeda was Ramirez’s toughest opponent to date. Anybody betting on Castaneda for…

This guy got outworked by Alamo and took a fight on short notice and believes he’ll beat Zepeda because?.... Yeah no. You’re getting stopped mid to late rounds. Zepeda was Ramirez’s toughest opponent to date. Anybody betting on Castaneda for…

Cinderella? I guess so, because it would take some kinda magic to beat Zepeda.

Always recognize and make the most of an opportunity to chase your dreams. I'll be rooting for him.