Casimero: Getting Credit As Road Warrior Doesn't Matter To Me

A showdown with Zolani Tete was one which Johnriel Casimero anticipated for months, mentally preparing not only for the fight but yet another opportunity to hit the road.

The mindset paid off as the 30-year old became just the fourth-ever from the Philippines to win major titles in three or more weight divisions after knocking out Zolani Tete in three rounds Saturday evening on the road in Birmingham, England.

“I knew in the back of my mind there was the possibility to fight Tete this year,” Casimero (29-4, 20KOs) told BoxingScene.com in spending virtually all year preparing for the bout. “At the time of my interim title fight with Ricardo Espinoza, Tete had just pulled out of his fight with Nonito Donaire, so there was a good chance we would wind up fighting.” 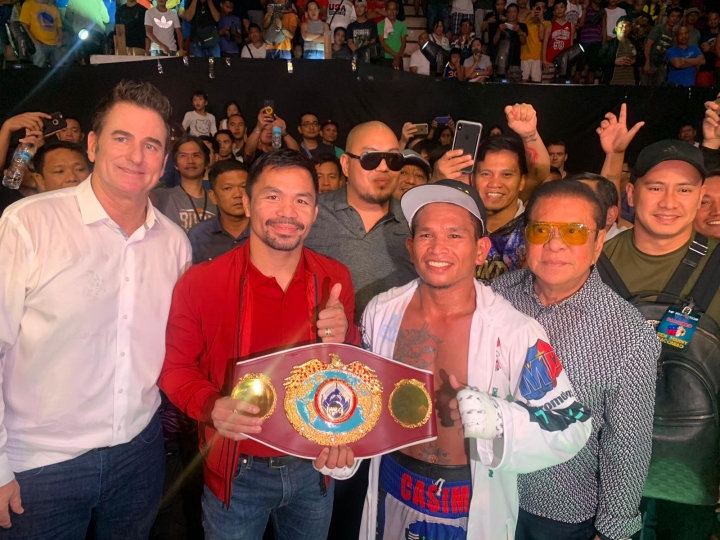 The sequence came in late April, when a last-minute request—oddly by Espinoza’s team—saw Casimero’s bout upgraded from an eliminator to an interim title bout, given Tete’s commitments at the time to the World Boxing Super Series tournament. Tete ultimately withdrew from his bout with Donaire and the tournament altogether after suffering a fight week injury, leaving Casimero as the interim titlist in waiting for a shot at the real thing.

It came about once Tete was fully healed, and of the knowledge that he would likely concede home field advantage. That part was never a concern, as Casimero has claimed wins in seven different countries, including a title-defending knockout win over previously unbeaten Charlie Edwards more than three years ago in London for his final flyweight title defense.

Title fight wins in Nicaragua, Argentina, Mexico and China in addition to his native Philippines had him more than ready for Saturday’s adventure, even versus Tete, a long-reigning titlist from South Africa who was fighting in his home away from in England where the bulk of his near four-year title reign has been staged.

“I don’t really think about fighting on the road,” insists Casimero. “They tell me where the fight is and I go.”

The “they” in the equation these days is MP Promotions, headed up by Sean Gibbons and its namesake Manny Pacquiao, whom Casimero has joined along with Donaire and Donnie Nietes as Philippines’ only ever boxers to win titles in at least three separate weight divisions.

Just two of Casimero’s ten title fights have taken place in his home nation, having won on that stage in Argentina, Mexico, China, Panama and now twice in England, along with interim title wins in Nicaragua and the United States while losing on the road in South Africa and Thailand.

“Getting credit as the ultimate road warrior doesn’t matter to me,” notes Casimero, who is angling for another road trip as he is eager to face unbeaten, unified bantamweight titlist Nayoa Inoue (19-0, 16KOs) next year in Japan. “It has always been my job to go wherever the fights are scheduled.”

Casimero definitely deserves a lot of credit for being a road warrior. People talk about how great Floyd is but never talk about that he never fought out of States.

[QUOTE=HumanBag;20224259]I don't even know how deep in your ass you pulled that racist accusation on me. While i root for my boys i never said anything racist or even insinuate against anyone unlike you where everytime a filipino fight you…

[QUOTE=chico malo ali;20224178]I’m not a nelo or nery fan u pathetic piece of shyt! But of course a racist piece of shyt like u would assume so![/QUOTE] I don't even know how deep in your ass you pulled that racist…

[QUOTE=HumanBag;20224154]What sad little twit. You better finish that canelo and nery hotdogs. You still have tainted beefs to finish[/QUOTE]I’m not a nelo or nery fan u pathetic piece of shyt! But of course a racist piece of shyt like u…

[QUOTE=chico malo ali;20224066]quit lying u bum! U know u only root for Filipinos! U wish Usyk was inside u ! Hahaha![/QUOTE] What sad little twit. You better finish that canelo and nery hotdogs. You still have tainted beefs to finish