UNCASVILLE, Connecticut – John Riel Casimero made the most of his huge opportunity on American soil Saturday night.

The powerful Filipino knocked down Duke Micah in the second round and stopped him in the third round of their scheduled 12-round fight for Casimero’s WBO bantamweight title. Referee Steve Willis stopped the action at 54 seconds of the third round in the opener of Showtime Pay-Per-View’s six-fight event at Mohegan Sun Arena.

The 31-year-old Casimero (30-4, 21 KOs), a three-division champion who was a 9-1 favorite, made the first defense of the WBO bantamweight title he won last November 30 by knocking out South Africa’s Zolani Tete (28-4, 21 KOs) in the third round in Birmingham, England. The 29-year-old Micah, the 11th-ranked contender for Casimero’s championship, suffered the first defeat of his seven-year pro career (24-1, 19 KOs).

“In the first round [I hit him with] a body shot and [I heard], ‘Ooh!,’ ” Casimero said. “Then I hit him with a hook and I heard, ‘Oh, sh-t!’ I think maybe first round [I would knock him out], but that’s a good boxer. … Duke Micah, all my punches, he eat. But he has a strong chin. I’m surprised because my prediction is one hit maybe, because I’m strong, man.” 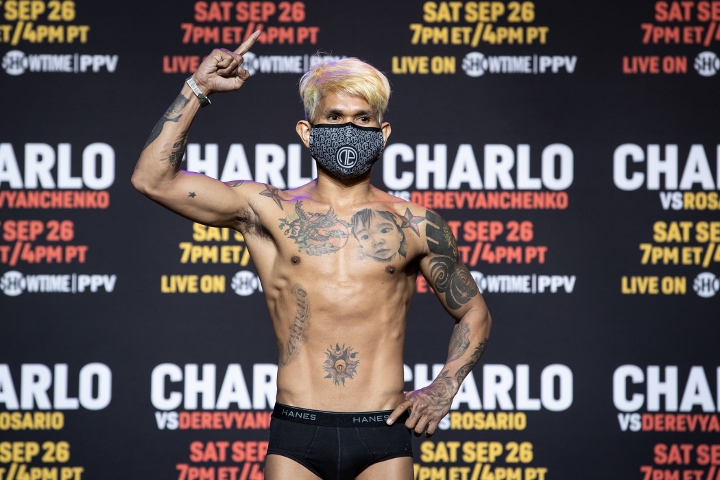 Casimero called out Inoue during his post-fight press conference for fighting Jason Moloney instead of him once their bout was canceled. Inoue and Australia’s Moloney (21-1, 18 KOs) are scheduled to fight for Inoue’s two titles October 31 at MGM Grand Conference Center in Las Vegas.

Referee Steve Willis warned Micah at the start of the third round that he needed to show him something or he would quickly stop the bout. He took several more power punches from Casimero, which made Willis step between them to stop the action

Micah was hurt badly, but he answered Willis’ count. Casimero tried his best to finish off Micah, who somehow managed to survive his onslaught.

Micah went to the canvas again with 37 seconds to go in the second round, but it was the result of a slip, not one of Casimero’s punches.

Both boxers threw punches after the bell sounded to end the first round, though none of those shots landed.

[QUOTE=Ca$ual Fan;20781416]I like both fighters - Inoue and Casimero. If they are to fight each other, that would be a good scrap. I’ll definitely watch it. If they don’t, it’ll be fine for me as well. Casimero might wanna consider…

[QUOTE=Ca$ual Fan;20781416]I like both fighters - Inoue and Casimero. If they are to fight each other, that would be a good scrap. I’ll definitely watch it. If they don’t, it’ll be fine for me as well. Casimero might wanna consider…

I like both fighters - Inoue and Casimero. If they are to fight each other, that would be a good scrap. I’ll definitely watch it. If they don’t, it’ll be fine for me as well. Casimero might wanna consider fighting…

[QUOTE=RGJTMMRDCMJRJSM;20780892]It's called the Shoryuken Punch! [url]https://streamable.com/849pey[/url] ^^^^He does that if he knows he can destroy his opponent. I saw him do that against Yamashi*ta. That was his stoppage move! He didn't do that against Tete, Ruenroeng, Edwards, etc. His style…

[QUOTE=George Orwell;20780841]This fella Casimero is a killer. He’s a mini Mike Tyson. Micah looked visibly larger two, in bulk and reach. And his last opponent was ridiculously taller. He seems to enjoy demolishing these larger foes like they’re nothing.[/QUOTE] Wack…