The Case for Gary Russell Jr. Fighting Once A Year

His appearance is as frequent as Groundhog Day.

He emerges from his burrow, usually performs brilliantly, and then returns to his hibernation.

If consistency is the key to remaining sharp, then Russell has achieved an unusual type of career reliability that has come to define him.

While most top fighters usually keep a schedule that includes two fights a year, Russell defies that norm by fighting just once.

Defend your title and then go home.

This year Russell is starting early. On Saturday, he will face mandatory challenger Tugstsogt “King Tut” Nyambayar in the main event of a Showtime tripleheader at the PPL Center in Allentown, Pennsylvania.

Russell contends that other top fighters won’t face him, so he’s relegated to squaring off against his mandatories. Whatever the reason, his appearances have been scarce.

This may not be a bad thing.

The great, Hall-of-Fame Showtime analyst Steve Farhood sees the pros and cons to what Russell is doing. 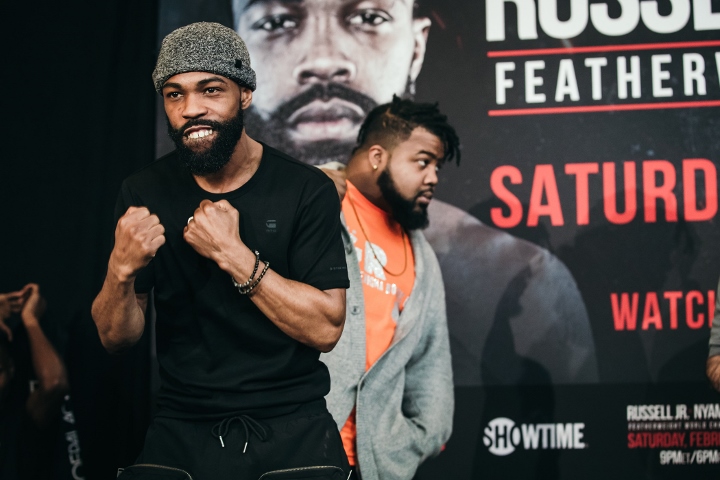 On one hand, he’s preserving himself. On the other, he’s doing a disservice to fans who want to see him more often.

“I definitely think an argument can be made (for fighting just once a year) — with that said — you are risking not satisfying fans and that affects your legacy and that affects public opinion,” Farhood told BoxingScene on Wednesday before trekking to Allentown to be part of the Showtime broadcast on Saturday. “I do think there’s a big positive to it, which is that you’re controlling your own career and you’re minimizing damage, but there’s a negative to it as well.”

One of the more talented, appealing fighters in the sport, Russell, who is always gracious in interviews and entertaining in the ring, has emerged as one of its most polarizing for fighting so infrequently.

“I think a lot of it has to do with his schedule,” Farhood said. “He’s gotten this reputation as being Gary ‘Annual’ Russell, but he’s determined to do things his way and what’s best for him and public opinion be damned. And I’m not so sure that’s not a smart philosophy because it’s his brain and it’s his body and it’s his career. Adding about the state of today’s superstars and how infrequently they fight: “Maybe the only positive about the top fighters fighting as rarely as they do these days is that they can take less punishment and they can stick around longer and they can extend their primes,” he said.

It wasn’t always like this. Top fighters sometimes fought as many as three and four times a year, Farhood noted. If a fighter entered the ring just once, he was usually a heavyweight, dating back to bygone eras, when Jack Dempsey fought “and might go two years without defending his title,” Farhood said of his later years. “A lot of the heavyweights in the 30s and 40s, until Joe Louis fought so frequently, a lot of them fought only once a year, sometimes skipping years.”

As time went on, fighters began to fight progressively less, a product of increased paydays, decisions to rest longer in between fights. “Now it’s basically two fights a year,” he said, “and Gary Russell takes that to a different level by fighting only once.”

Still, fans can’t argue with the results in the ring. Russell has perhaps the fastest hands in boxing, an aggressive, swarming style, and he’s not afraid to take on challenges. He lost a majority decision to pound-for-pound king Vasiliy Lomachenko in 2014 in a fight that really wasn’t that close but Russell was competitive. More recently, he overwhelmed Joseph Diaz in 2018 to defend his WBC featherweight title. That result looks even more impressive now considering that Diaz (31-1, 15 knockouts) won a world title against Tevin Farmer on Jan. 30 in a
Solid performance that validated his potential as a former U.S. Olympian.

Now, Russell is facing Nyambayar, a former 2012 Olympic silver medalist from Mongolia, on Saturday. While not widely known, Nyambayar is highly respected, and Farhood expects this to be one of Russell’s toughest fights since his only loss to Lomachenko. Whatever happens, Farhood doesn’t think Russell will be affected by public opinion.

“I think he’s very self-assured in his beliefs,” Farhood said. “And that’s a good thing. I think his career is going very — with the exception of the Lomachenko loss — the career is going very much how he would like it. He’s obviously made good money, and he’s doing it on his terms and he’s stubborn but that’s not necessarily a bad thing.”

So, what’s next if he wins on Saturday? Russell is just 31 and is still in his prime. He’s discussed facing four-division titleholder Leo Santa Cruz next, a fight that seems possible because of their affiliation with advisor Al Haymon. He’s also warmed to the idea of moving up two divisions and facing lightweight titleholder Gervonta Davis, who is also under the Haymon umbrella.

“In terms of legacy and in terms of how he’s perceived by fans and media, he needs Leo Santa Cruz, maybe he moves up two divisions and fights Gervonta, whatever the fight is — he needs the high-profile fights,” Farhood said. “I’m not so sure he cares about legacy but if he does, that’s what he needs at this point.”

[QUOTE=wrecksracer;20376610]an active fighter has to fight a variety of styles, making him a more complete fighter. The one time GRJ face elite opposition, he lost. Also, fighting more often makes a fighter more visible to the public. The public isn't…

[QUOTE=UNBIASED BOXING;20377959]I think he might be willing to fight a second fight this year. He's fighting pretty early this time... in February. For the past 3? years he was always fighting in May. I hope we get a Russell Jr.…

It's his life. He makes a lot more money for doing one training camp and fight a year than I do going to work 46 weeks.