Carson Jones Reacts To Robbery Against Margarito: "He Quit!"

As he sat on his stool after the seventh round of his bout with Carson Jones, it looked like for all the world that a fading Antonio Margarito had called it a day and that Jones had scored a stoppage victory in Chihuahua, Mexico this past weekend.

After some early success, Margarito began to fade in the middle rounds and by the seventh round it was clear that Jones was in control of the fight and coming on strong. But inexplicably the fight went to the scorecards as the result of a cut on Margarito that occurred in the second round due to an accidental clash of heads. 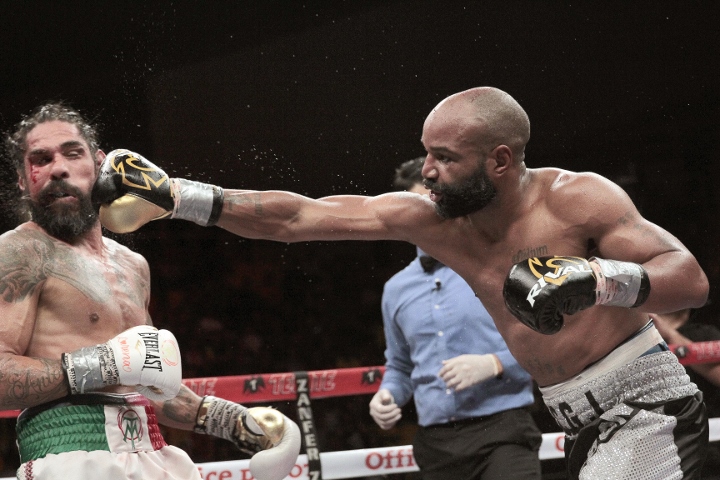 "It's really the worst case of a robbery I've seen in recent  years," Jones told BoxingScene.com on Tuesday afternoon from Oklahoma City, Oklahoma.

"We knew going to Mexico that they weren't going to give me a decision but I didn't think they were going to be able to rob me in that manner. When he quit on the stool they conveniently found a way for him to win. It's just unbelievable, this type of stuff hurts boxing."

Jones had taken control of the fight and states - ''I know for a FACT that I had won the fight. I got up and raised my hands and then I see him, he gets up and he's smiling and happy, he raises his hands, as well. So it put a question of, 'what's going on?' Then obviously the robbery happened but my thing is obviously  there was some sort of corruption going on. How do you quit on a stool and then you get up and you immediately know you won. I couldn't believe it."

There's no doubt that Margarito was the house fighter in Mexico on a card that was staged by Zanfer Promotions.

"I know for a fact I would've stopped him," opined Jones, who's been a road warrior throughout his career that began in 2004. "I was on my way to a stoppage. I probably would've stopped him the very next round in the eighth. Which is why he quit on the stool. I guess we'll never know because they did a job on me."

Would a rematch interest Jones?

"Of course," he answered, "I'd love a rematch, I would prefer it to be somewhere in the States and possibly get some fair treatment - even though there's still corruption here in the States, as well. But it would be a little bit better."

"It hurts because obviously there's another blemish on my record. In a sense you're taking food off my table and my families table and you damage my career and taking opportunities away from me. I could've gotten a bigger fight and now I have to go back to the drawing board," Jones lamented.

"Margarito can go and possibly get a bigger opportunity. I honestly don't think he deserves it and he may not be able to simply because what happened on Saturday. But it's still a possibility for him, I have to figure it out."

But Jones, who says he will take a few weeks off before getting back to work, remains undaunted.

"What I'm hoping is that everybody sees what happened and sees the truth and it doesn't hurt me too bad."

I dont how much Jones was paid but he must have really needed the cash. To agree to fight MargoCHEATO in MEXICO your really risking it. But how shot is Margacheato. He came into the heavy (Mexico scales always seem…