Carson Jones: I Will Retire Antonio Margarito in His Own Country!

Carson Jones finished his preparation, he's in great condition and on weight, and assured that with his speed, power, stamina and motivation - he will rise to the ring on Saturday night to make a statement by derailing former world champion Antonio Margarito.

He predicts a clear, forceful knockout to end the career of the "Tijuana Tornado."

"Mr. Jones" (40-11-3, 30 KO's) will be a hard opponent for Margarito (40-8, 27 KO's), in confrontation scheduled for ten rounds over the junior middleweight limit, as part of a card being staged by Zanfer Promotions in the Gymnasium "Manuel Bernardo Aguirre" in the city of Chihuahua. The card will be transmitted by TV Azteca. 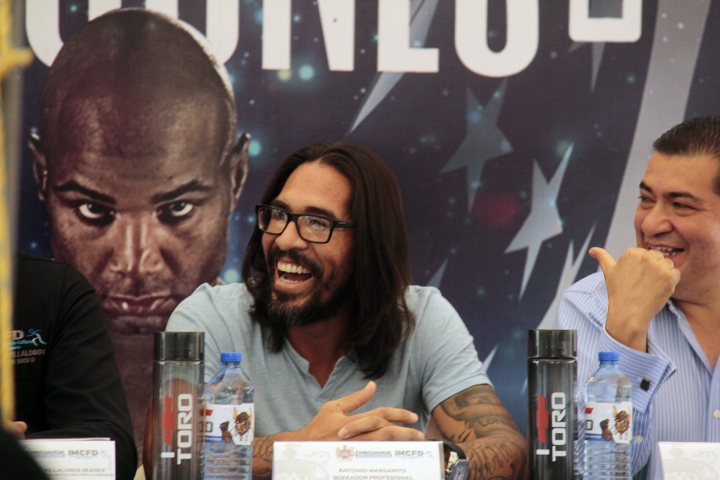 Before traveling to Chihuahua, Mexico, from his headquarters in Oklahoma City, Jones said he was calm because he understands that the Mexican public knows boxing and that when he defeats Margarito, the ovations and recognition will fall upon him despite being the visiting boxer.

"Margarito had a great boxing career, he was the terror, but now he is in the final stage and I will take care of giving him that push into retirement in his own country. Margarito has the style and the conditions that fit perfectly for my style and I'm going to beat him clearly, that's for sure," said a dangerous 31-year-old Jones.

The duel between Margarito and Jones will be backed by a must-win showdown, between two boxers who are coming off defeats and can't afford to lose.

In one corner will be Canelo's older brother, Ramón "Innocent" Alvarez (24-6-2, 16 KO's), who returns for the first time since suffering a two round knockout loss to Omar Chavez back in April.

In the other corner will be Johnny "Vaquero" Navarrete (33-10-1, 15 KO's), a dangerous boxer who has defeated rivals such as Jorge "Maromerito" Paez, Juan Macías Montiel and Jorge Pimentel, and has fought four times in Canada against unbeaten fighters - gaining the recognition of the public and press despite having suffered defeats in controversial decisions.

[QUOTE=jreckoning;18003371]Williams and Margarito were both better than Hatton and that version of semi-retired DLH. That's the truth. I don't blame Floyd for getting the money though.[/QUOTE]People like to throw the word "duck" around and that didn't happen.

[QUOTE=Raggamuffin;18002493]The real threats were beaten by lesser men than Floyd. Foh[/QUOTE] Williams and Margarito were both better than Hatton and that version of semi-retired DLH. That's the truth. I don't blame Floyd for getting the money though.

[QUOTE=jreckoning;18001716]It would have been nice to actually find that out. :boxing: I guess when you're getting that DLH Hatton money you don't care about the real threats who would make you a lot less.[/QUOTE] The real threats were beaten by…

[QUOTE=Raggamuffin;18001699][B]Guys like Margarito and Williams don't beat guys like Floyd. [/B]And who has Margarito beaten outside of Cotto and 6 Heads!!!???[/QUOTE] It would have been nice to actually find that out. :boxing: I guess when you're getting that DLH Hatton…

[QUOTE=Mr.Fantastic;18001189]The Cotto win isn't the only thing he's accomplished.He was rated top 3 for many years, #1 for some too. He beat some good names, guys that even went on to go on the P4P list, a list he himself…