Thursday night, we get a heavyweight main event born of circumstance.

Miller won’t be returning after all.

Not for a while.

In steps 39-year old former title challenger Carlos Takam (38-5-1, 28 KO) as the late replacement. While the ESPN weeknight shows in the last month or so haven’t set television ratings ablaze, they are still an opportunity to at least generate conversation among the boxing faithful. They’re giving fighters a chance to be active.

They’re giving them a chance to be seen.

For a fighter like Takam, visibility means a chance to still bite at the fringes of relevance. Now 39 and riding a modest win streak following consecutive stoppage losses to Anthony Joshua and Dereck Chisora, Takam is at a point in his career where it would be easy to fade without many noticing.

A win over Forrest won’t change his age or physical wear but, if a win entertained, could open the door for one more big fight before the door shuts for good. For fans, that wouldn’t be a bad thing. Takam has been the sort of heavyweight who beats the guys who don’t quite belong at the world level and falls short when he takes the step from in-between himself.

His falls have shown how narrow the line can be.

Takam gave Joshua fits even if he wasn’t winning many rounds, gave Joseph Parker good work, and his battle with Alexander Povetkin was a solid night for both men.

For Forrest, it’s just a plain opportunity. Two fights after a disputed, televised loss to Jermaine Franklin, Forrest has a chance to beat a known commodity. Forrest has a case to make that he’s unbeaten since a pair of early career losses to then fellow prospects Michael Hunter and Gerald Washington. Officially, he’s won 19 of his last 20. 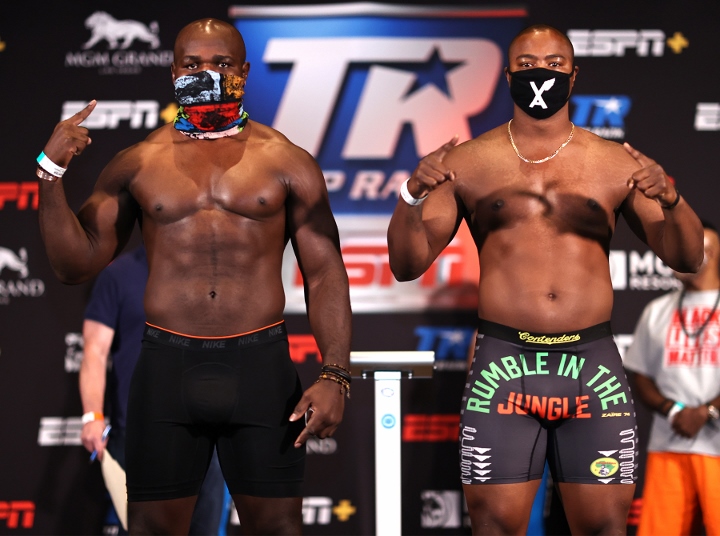 A win Thursday won’t make Forrest a contender but at 32 every step counts. Heavyweight title shots are harder to come by with major titles split between Joshua and Fury. Being a winner right now makes it easier to be discussed, if not as an immediate option, then as someone the public recognizes down the road for bigger names with belts or for the time being without.

The downside of being the lone focal point of attention for the sport right now is what happens with bad nights. Should the fight not entertain Thursday, should anything not entertain right now, participants could have it held against them more than would be the norm in a more glutted market.

Boxing always has room for heavyweights. Heavyweights that make a good show don’t lack for work. In a time when the big men have a buzz around them, every impression counts. Takam and Forrest have the eyeballs Thursday.

Now it’s a matter of what they do with them.

While everyone else is jockeying for position, the mandatory situations for Joshua and Fury aren’t all bad for fans. If Kubrat Pulev, Oleksandr Usyk, Dillian Whyte, and Deontay Wilder all have to get their turns first, and we still get to Joshua-Fury, that would be a hell of a road to build through. The problem: that much business takes way too long in 2020...Jose Zepeda won and that’s good enough for him for now. A rescheduled showdown with Ivan Baranchyk would be a pleasure later this year...Watchmen was as good as anything that has ever been on HBO and a great sequel to the comic. Caught up to the consensus on that one now...If anyone missed it, introduced a new sort of competitiveness index here in place of a regular P4P list. Feel free to love or hate it with abandon now or when  it gets updated...Jason Moloney’s pursuit of Johnriel Casimero on Twitter is fun...Katie Taylor-Delfine Persoon II is good matchmaking if it happens. Let’s hope the judges are up for it...Doom Patrol Season 2 was a little somber the first few episodes and then it was Danny the Street time. There is still joy in 2020.