Star Boxing officially announced the signing of heavyweight title contender CARLOS TAKAM (36-5-1 28KO's) of France, by way of Douala, Cameroon.  Standing at 6'3", the heavy handed, Takam has taken on some of the best in the business, in the heavyweight division. Star Boxing revealed the signing last week on its social media platforms.

Takam was an amateur standout in Cameroon.  In 2003, he competed in the All-African Games in Nigeria, finishing with a bronze medal. In 2004, Takam qualified for the Athens, Greece Summer Olympics by earning Gold at the AIBA African Olympic Qualifying tournament in Morocco.  Later that year, representing his native country of Cameroon, Takam fought in the Summer Olympic games in Athens, Greece, making it to the sweet  sixteen.

He turned pro in 2005, just one year after the Olympics. In Takam's last bout in December 2018, he defeated German prospect, SENAD GASHI (then 17-1 17KO's) who was favored in the bout.   The bout took place at the 02 Arena in London, ending in a seventh round TKO victory for Takam. 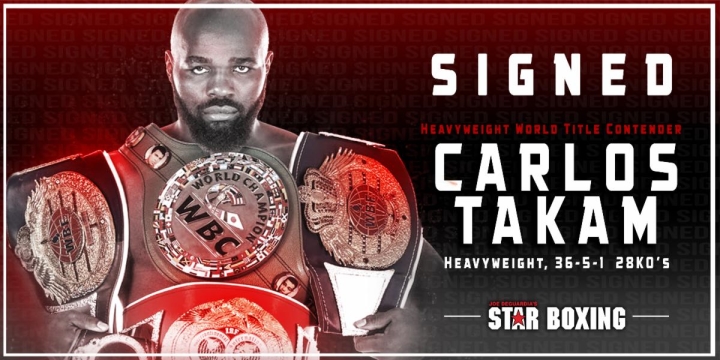 Takam said this about signing with Star Boxing, "I'm very happy to sign with Joe and Star Boxing.  It's almost one year now I'm free agent.  I didn't sign with any promoter.  I have had several propositions on the table, but with Joe [DeGuardia], the way I see, I have good feeling that we can achieve my potential together.  I have big ambition in boxing for these coming years.  Because I was taking my time looking around before to make any decision.  I am ready to do the job."

Star Boxing CEO, JOE DEGUARDIA said this about the signing of Takam, "Carlos is a world class heavyweight who has faced some of the best in the division.  Throughout boxing history, the heavyweight division has always cultivated the most buzz, and that buzz is back."  DeGuardia continued, "I think highly of Carlos. The hard-core boxing experts know how good he is, but now he will show the casual fans and will surprise many as to how good he can still be.   We are really excited to bring some big things to the table for him, and are confident that a heavyweight championship of the world bout is in his future."

[QUOTE=joe strong;19999124]I was thinking the same thing... I think the writer is wrong. I have no idea how to find it out but I'm pretty sure Gashi was brought in as an opponent...[/QUOTE] He was. Just like Takam should be…

[QUOTE=JuanSkinner;19998654]Gashi was favoured going into their fight? And that's the bottom line cause Harvey Price wrote this[/QUOTE] I was thinking the same thing... I think the writer is wrong. I have no idea how to find it out but I'm…

Gashi was favoured going into their fight? And that's the bottom line cause Harvey Price wrote this

No way Takam is 6'3, I don't buy this fake boxrec height.