Carlos Takam physically suffered more than he bargained for in taking a short-notice assignment, but one where his career will benefit moving forward.

Judge Max DeLuca had the bout 98-92, with judge Patricia Morse Jarman scoring the contest 97-93 and Dave Moretti a little closer at 96-94 all in favor of Takam, who stepped into the main event on just two weeks’ notice.

The makeshift main event came on relative short notice for both boxers. Forrest was originally due to face Jarrell Miller, the disgraced unbeaten heavyweight who threw away yet another big opportunity after once again providing a dirty drug test through pre-fight random testing.

Luckily for Forrest, the DiBella Entertainment-promoted heavyweight was able to keep a fight date on Top Rank’s show. In came Takam, who was previously training for another ESPN bout only for the opportunity to fall through when scheduled opponent Oscar Rivas suffered an elbow injury and was forced to withdraw.

“The preparation for this fight was not easy,” the 39-year old Takam admitted to Bernardo Osuna after the bout. “I was supposed to fight June 14 veruss Rivas but Mr Rivas could not fight because he had an injury. My promoter (Joe DeGuardia, Star Boxing) called me and said he had a fight for me.

“I checked out Jerry Forrest and said, ‘OK, let’s go.’ He asked if I was sure. I told him I’m ready to fight anybody.”

The lack of full preparation for one another showed in an awkward opening round. Takam—who represented Cameroon in the 2004 Olympics—put his size advantage to use, his well-proportioned 245 ¾-pound frame used to outmuscle his southpaw foe whom he outweighed by 20 pounds.

Both boxers looked sharper in round two. Takam bounced on his toes while Forrest came forward in hopes of working his right jab. Takam’s long left stick was enough to keep the Virginia-bred heavyweight on the outside for much of the frame. Forrest closed the gap, connecting with a left hand which forced Takam—a 39-year old Cameroon native now based out of the greater Las Vegas area—to clinch. Takam closed the frame with a sweeping right hand upstairs. 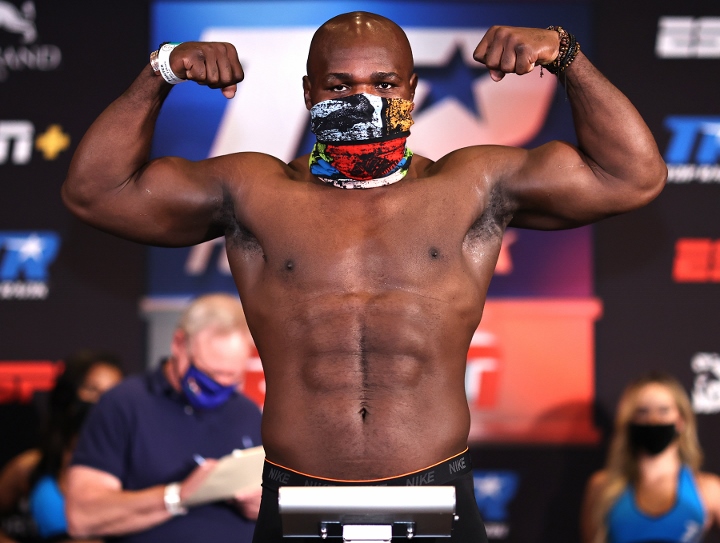 Forrest grew tentative in round three, struggling to pin down a mobile Takam and failing to let his hands go. A similar pattern played out in round four, where Takam mixed it up between infighting and bouncing on his toes on the outside. Forrest was unable to time the rhythm of the 39-year old contender, resulting in his falling well behind.

Takam continued to outwork a reluctant Forrest in a sloppy round five marred by frequent clinching. A cut over Takam’s eye seemed to have dulled his own attack, though his simply remaining active was enough to continue banking rounds.

Forrest connected with a left hand in round seven, a point in the fight where he seemed poised to turn the tide. Takam shook off the blow, but his own offense was dulled as the sight of his own blood and the pain of a suspected fractured cheek bone appeared to have affected his performance in the second half of the fight.

Takam effectively circled away from Forrest’s left hand throughout round eight, Action continued to be sorely lacking in the slow-paced main event, with neither fighter letting their hands go in the later rounds. Takam scored the best punch of the frame, connecting with a right hand as Forrest dropped his left hand low.

Round nine was marred by frequent clinching as the pair of heavyweights fought through fatigue. Takam fought behind a flicking jab, while Forrest moved forward but did little once he made his way inside.

Forrest was given the marching orders by head trainer Anthony Chase to go for the knockout as the bout entered the 10th and final round. Instead, it was Takam who took the initiative, connecting with lead right hands, Forrest fought behind a range-finding jab, hoping to land a straight left behind it but never pulling the trigger. A left hand finally connected for the 32-year old southpaw late in the round, but lacked any follow-through as Takam was able to clinch and recreate distance.

Takam led in every statistical category according to Compubox. Takam landed 106 of 455 punches for a 23% connect rate, including 30 body punches. Forrest—seven years Takam’s junior—landed 70 punches out of just 321 thrown for a 22% clip as he falls to 26-4 (20KOs), suffering his second loss in his last three starts.

A narrow defeat by Forrest to Jermaine Franklin last July was met with dispute by most observers, although the Newsport News native remains without a signature win while leaving Vegas with a lot of regret.

Meanwhile, Takam advances to 39-5-1 (28KOs), The win is his fourth straight win after suffering back to back knockout losses to unified heavyweight titlist Anthony Joshua and fellow former title challenger Dereck Chisora.

While another title shot is in his sights even in the twilight of his career, the veteran contender wouldn’t mind making use of his prior training camp as a springboard to such a fight.

“I want to get me Oscar Rivas,” Takam suggested of his next opponent. “I want anyone in the top five at heavyweight or a world title shot if that materializes.”

[QUOTE=JakeTheBoxer;20650540]You want to see Takam against those guys? Why? Takam lost every time he stepped up.[/QUOTE] Fresh blood lol. I'm really not looking forward to a supposed 3 combined fights of Wilder and AJ. I'd trade the 3rd Wilder fight…

I always like Carlos Takam, no matter what. This guy is tough as nails and rough fighter in the inside to handle. If his eye is good, he can fight maybe 2 to 3 years max. :boxing:

[QUOTE=Afi23;20651325]Don't forget Bradley here![/QUOTE] That’s what they’re paid for and if they wanna keep the show rolling , they need to talk about the home team Or else it’s , next PBC just lost their slot on fox sports Odd…

[QUOTE=Boxingfanatic75;20650241]Comment of the month right here. They fired Teddy for speaking truth. [B]Kriegel makes every moment a made for TV drama.[/B] The guy is literally boxing clueless.[/QUOTE] Don't forget Bradley here!