Carlos Morales will look to break down and finish 130-pound rival Rene Alvarado for the knockout in Saturday’s WBA eliminator at The Fantasy Springs Casino in Indio, California.

The 28-year-old Morales (17-3-3, 6 KOs) wants to rebound from losses in two of his past three fights against Alvarado (29-8, 20 KOs), a 29-year-old Nicaraguan winner of five straight (four KOs) since falling by unanimous decision to former champion Yuriorkis Gamboa in March 2017.

“I’ve followed Alvarado’s career and we nearly fought at some point two years ago, but he couldn’t take the fight,” said Morales of Alvarado, whose first-round stoppage of Luis Gonzalez in March followed his bloody split-decision victory over three-time title challenger Denis Shafikov in December 2017.

“I know Alvarado’s a tough fighter who is going to come forward, but I am coming for the knockout and I have to be intelligent about it. I have advantages in height [5-foot-10 to Alvarado’s 5-foot-7,] speed and a better IQ for boxing, so I just have to use my skills to break him down and finish him.” 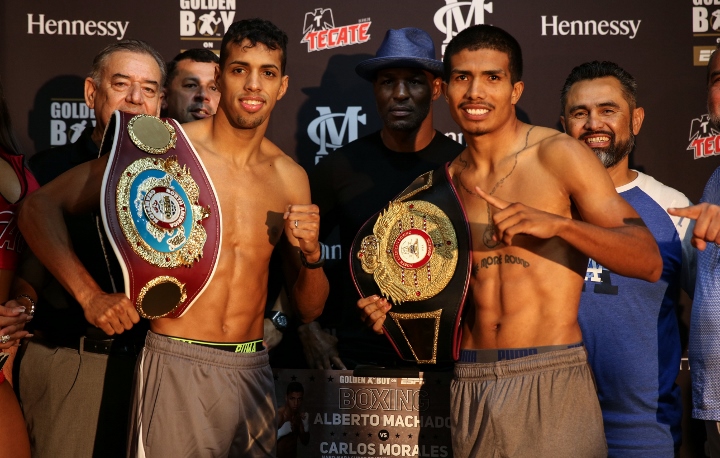 “I took Ryan Garcia’s power and speed away from him and had him hurt a few times,” said Morales. “But the only thing that I didn’t take away was his holding because he was able to survive.”

A victory over Alvarado could earn Morales a return bout with Machado, who has since won three straight, with October’s three-knockdown, first-round stoppage of Yuandale Evans being his second knockout victory during that time.

“I just need to get past Alvarado and then we’ll be fighting Machado for a world title soon, so I’m coming for him. That’s what I want – to fight Machado once again. I was in there with Machado for 10 rounds and I saw a lot of places where I should have made adjustments,” said Morales.

“I feel that I can do a lot better now that I know how Machado fights, and I see myself being victorious the next time. What I’ve learned from fighting Garcia and Machado is to go in there and take risks, try to take their heads off and don’t leave it in the hands of the judges.”