Carl Froch Says David Haye Was One Of Britain's Best Ever

Three-time super middleweight champion Carl Froch says David Haye is one of the best boxers that Britain has ever produced.

Haye, 37, announced his retirement via a video message on social media yesterday (June 13) as well as a lengthy statement on his hayemaker.com website.

After 27 years in boxing the former unified cruiserweight and WBA heavyweight champion called time on his career. 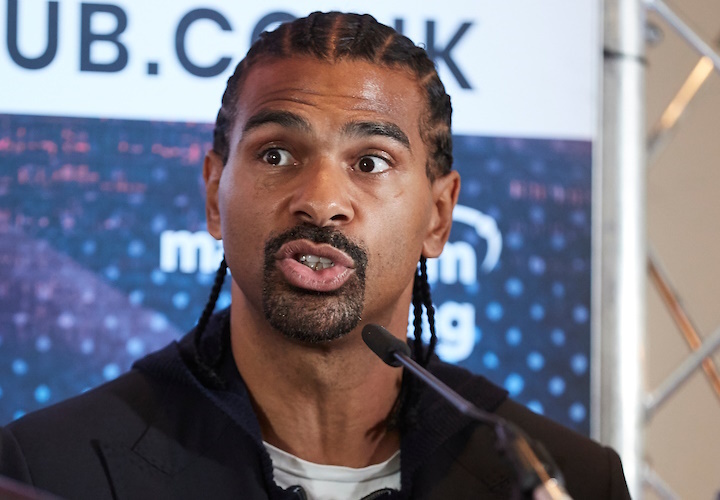 And his long-time friend Froch, speaking in his column for Sky Sports, described Haye as "explosive, entertaining and always worth watching" and was glad he had retired from the sport.

"To be undisputed cruiserweight champion of the world was brilliant, but then he went on to become a heavyweight world champion," said Froch who retired from boxing in July 2015.

"To do that, when he was nowhere near a heavyweight, especially against that giant Nikolay Valuev, deserves massive respect.

"Going to Paris to take on Jean Marc Mormeck in his own back yard, to take on Valuev, then Wladimir Klitschko and other guys so much bigger than him, showed how brave he was."

Haye's last fight came in a rematch against Tony Bellew last month. The two heavyweight grudge matches saw Bellew win on each occasion, somewhat unexpectedly first time round, but not so much when the pair met again. Bellew stopped Haye in each fight, making what happened against the likes of Valuev and Mormeck feel like a lifetime ago.

"I hope he won't be remembered for the two defeats against Tony Bellew. He has had one hell of fantastic career," said Froch.

"As a friend of David's of around 20 years, I didn't want to see him make the recent comeback, but that is David. His career was fantastic to follow and watch, and it was a rollercoaster ride.

"David Haye's natural ability and class shone through and even if he hasn't finished on top, he is one of the best fighters this country has seen."

[QUOTE=jasontreks;18858206]Steve Cunningham held the IBF belt at the time, Haye had the other 3 after knocking out Mormeck(WBA, WBC) and Maccarinelli(WBO).[/QUOTE] Of course. Thanks.

[QUOTE=animelive;18859453]I said untested because there will always be a question of whether those two last losses were caused by injury or not. Losing to Wlad isn't a shame as he gets credit for taking the fight. The thread is literally…

[QUOTE=Sid-Knee;18858590]But you said he was untested meaning he never fought good opposition. Which was wrong. Who called Haye Britain's best? He was the best Cruiserweight at the time and a good Heaveyweight but he is far from Britain's best. Plenty…

[QUOTE=animelive;18858540]He lost 3 of those fights and he is 38 years old. That is criminally low amount of fights for Britain's best.[/QUOTE] But you said he was untested meaning he never fought good opposition. Which was wrong. Who called Haye…