Carl Frampton warmed up for a shot at Jamel Herring’s WBO super-featherweight title with a seventh-round stoppage of Darren Traynor at York Hall in East London.

For most of the fight, Frampton was happy to fight in second gear, but when he started getting through to his taller opponent with body shots the end was swift. He nearly finished matters in the sixth, when a brutal left to the body dropped the Scot on his face after letting out a loud grunt. But when he landed another body shot in the seventh round, Traynor surrendered.

“If I had the chance to take hm out in the first round, I would have done it, but saying that, the rounds were good.

“I had to make sure complacency didn’t creep in at all. It was a potential banana skin. No one is expecting Darren to win. There was no pressure on him and he had a decent game plan, he was trying to step back and not rush things. But once I started landing my jab, and I hurt him a few times with the jab and then the body shots.” 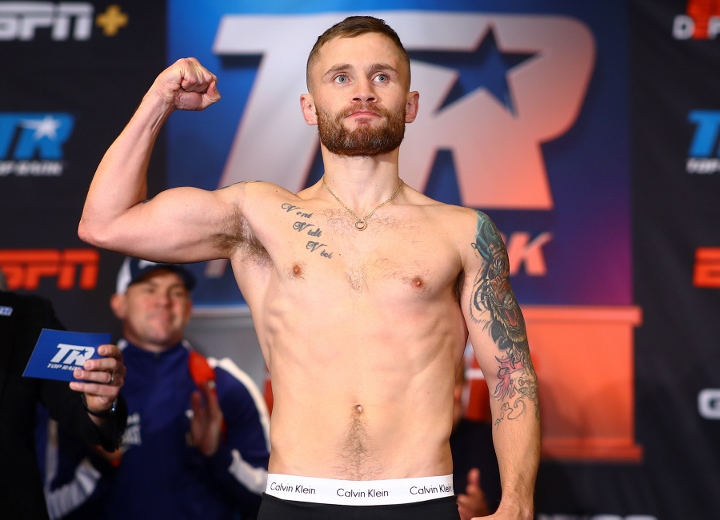 Frampton was having his first fight since operations on both his hands in December, but he said he had no issues with the injuries. Traynor had come in at short notice as a replacement for Vahram Vardanyan.

“It was a better opponent for Herring than the original opponent, because he was about my height or a little bit shorter,” Frampton said. “Darren isn’t a southpaw but the dimensions are similar. But I know I need to be a lot better for Herring. It was good to get the rounds done and my hands are fine. Onwards and upwards.”

Frampton had been due to fight Herring in June, but now expects to face him late this year, providing Herring beats Jonathan Oquendo next month.

“We have been talking about it for a long time so hopefully had that’s it,” he said.

Frampton looked small next to Traynor, but found the Scot easily enough with the left jab and landed a decent overhand right too. He upped the pace in the second, although was happy to take his time for openings to appear.

In the third, Frampton kept his dominance, picking his way inside. Although Traynor had some success with two clubbing rights, the Belfast man finished the round well with a sharp left hook.

Frampton was having problems getting into range against the taller man and he dived in at times with hooks from distance. In the fourth, he missed with a left hook, but the right landed on the button and, near the end of the fifth, when he tempted Traynor into an exchange, he natural speed saw him outland the Scot.

Traynor did OK when keeping Frampton away with the jab, but by the sixth round, Frampton was starting to throw shots in bunches.

A right hand rocked Traynor backwards and after switching a right to the body, Frampton found the opening for a huge left hook downstairs. Traynor sunk to the floor, lying down face first before scrambling to his feet just before referee Michael Alexander completed his count. The bell sounded straight after.

At the start of the seventh round, Traynor kept moving as he tried to stay out of range, but when Frampton landed another left hook to the body, the Scot waved his arm in surrender and turned his back, prompting Alexander to wave it over. The time of the round was exactly one minute.

Boxing in an empty arena was a different experience for Frampton, although he knows it is possible that the fight with Herring could have no fans too.

“It was a bit surreal, but once you are in there and another guy is throwing punches at your head, you soon switch on,” he said.

Also on the card, Dennis McCann knocked out Brett Fidoe with a left hook to the body at 2:06 of the second round. It was the teenager's seventh successive win and Fidoe's 16th straight defeat, although it was only the second time that he had been stopped in 82 fights.

Traynor after body shot, this is what I thought of, LOL!!!! [url]https://youtu.be/FooBIlaRKl8[/url]

That was funny!!! The guy ate the body shot and just waved off the fight himself, LOL!!!!

[QUOTE=jreckoning;20707874]Yeah, Herring posts on here. Would love to hear his thoughts on that fight.[/QUOTE] Guarantee Jamel is liking his chances, not sure Frampton has the quickness to get inside any more against a longer guy like Herring