Carl Frampton: I Really Want To Do a Number on Jackson

CARL FRAMPTON insists Luke Jackson will regret his trash talk when they finally meet in the ring in Belfast on Saturday August 18.

The Australian (16-0) has blasted Frampton in the build up ahead of their interim WBO featherweight title clash at Windsor Park.

Jackson has claimed Frampton is past his best, looking heavy in the gym and been critical of the Belfast man’s amateur pedigree.

“He can say what he wants, but he has never boxed at the level I have boxed at,” snapped Frampton (25-1).

“We talk about levels in this game and there are different levels. I have boxed at a very high level for a long time.

“This is the first time he has mixed it at a high level and he is not going to be able to cope, especially coming to Belfast.

“I don’t read into odds, but I imagine I am a strong favourite. The bookies haven’t got it wrong because basically I want to do a number on this guy.

“He has been slightly disrespectful with the things he has said. He has tried to backtrack, but the bottom line is that he has said these things. 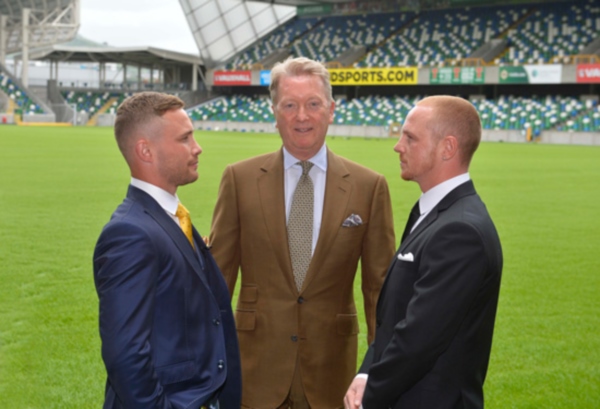 It will be Frampton’s third fight under trainer Jamie Moore and insists he has never been happier as a boxer.

He added: “The fight is very soon, but this camp has absolutely flown by. It doesn’t seem that long ago when we were in Tenerife and that was a couple of months ago.

“It’s probably something to do with how much I am enjoying my boxing right now.

“ I’m enjoying myself as a boxer and it is a good craic in the gym. There has been some great wins like Rocky and Martin recently.

“There are good quality lads in the gym. We all train hard, but nobody takes themselves too seriously away from the boxing and that is the environment I like to be in.

“We’re serious when we have to be, but there is a lot of light hearted stuff that goes on when it’s down time.

“I met these boys last yea ago, but we’re friends for life.”