The legal battle has begun in a North Ireland High Court, between former world champion Carl Frampton and his ex-manager and promoter Barry McGuigan.

The Belfast fighter claims that he wasn't paid properly under an arrangement which "unjustly enriched" McGuigan and his company, Cyclone Promotions.

According to the Belfast Telegraph, a judge was told that Frampton's parents believe they lodged up to £1 million raised through selling tickets to their son's bouts into McGuigan's bank account. 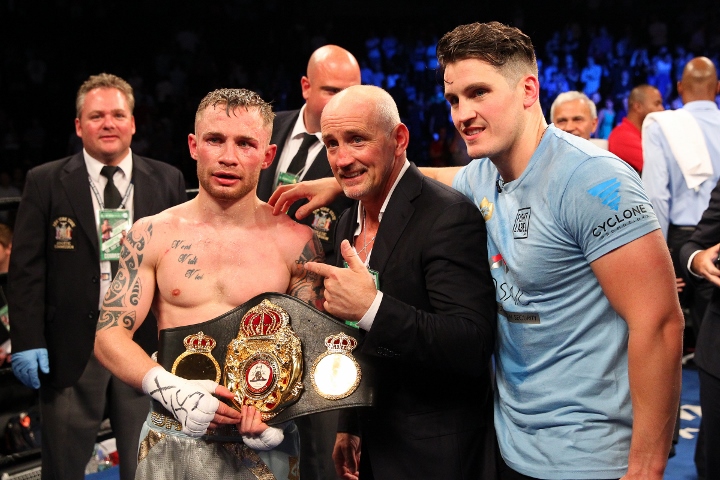 The legal action is Frampton's counter-claim to a separate legal proceeding brought against him by Cyclone Promotions at the High Court in London. When that case was filed, Frampton's lawyers promised that a counter-claim would be filed.

McGuigan went after Frampton for breach of contract. Last summer, Frampton cut ties with McGuigan and is now promoted by Frank Warren.

The lawyers for McGuigan argued that the case should be heard at the High Court in London - where his case is being heard.

McGuigan became Frampton's manager after coming to Belfast to sign him in 2009. The judge was told that Frampton would have decided differently if he'd known McGuigan and his wife had been banned from being company directors for five years after a previous venture had debts of £80,000 back in 1996.

In an affidavit obtained by the Belfast Telegraph, Frampton stated: "I do not believe I would have signed an agreement with Barry McGuigan if he had told me about his disqualification as a director."

The boxer's parents were said to have sold a large number of tickets to their son's fights after the management arrangement was signed.

Referring to Frampton's father, the boxer's lawyer said: "He paid large amounts of ticket money in cash into Barry McGuigan's bank account in Belfast. There's a dispute between him (Mr Frampton Sr) and Mrs McGuigan - he thought possibly up to £1m in cash over that period, she says £220,000. But it's a lot of cash being collected from fights from people in Belfast."

It is further claimed that Frampton's former management company had a conflict of interests and "withheld money due to him" after McGuigan started acting as promoter.

[QUOTE=Paddy Mashdown;18522844]Source? Hasn't be just signed a deal with BT Sport? BT have even more money than Sky AFAIK.[/QUOTE] Companies house.. freely available financial info for any company and its directors. If you think that BT having x and Sky…

[QUOTE=yammy25;18521193]The guys just signed to queensberry promotions, their accounts are in the ****ing toilet and Franks rifled money through about 4 different companies just to keep himself afloat[/QUOTE] Source? Hasn't be just signed a deal with BT Sport? BT have…

Everyone knows that McGuigan and his family bled Carl dry for years, everyone in the family was on the payroll lol. It's common knowledge that Quigg came out with more cash than Frampton despite Carl being the A side.

A friend of mine called this after the Santz Cruz fight, he works near where Carl is from and had heard whispers that not everything was right in the Frampton camp and had previously mentioned it was something to do…

[QUOTE=yammy25;18521193]Not saying the framptons arent right here.. but if carl is suggesting that McGuigans previous dealings would have made him he say no if it was known to him is rubbish. The guys just signed to queensberry promotions, their accounts…