Canelo's Trainer: It Was Difficult Fight, We Fought Very Cautiously

According to head trainer Eddy Reynoso, Mexican superstar Canelo Alvarez (53-1-2, 36 KOs) was very cautious when he squared off with Sergey Kovalev (34-4-1, 29 KOs) on Saturday night at the MGM Grand in Las Vegas.

Canelo, who owns the WBA middleweight title, moved up by two full weight divisions to challenge Kovalev for the WBO light heavyweight title.

Canelo was not taking a lot of risks in the first half of the contest, as Kovalev was jabbing away for most of the fight to keep the challenger at bay. 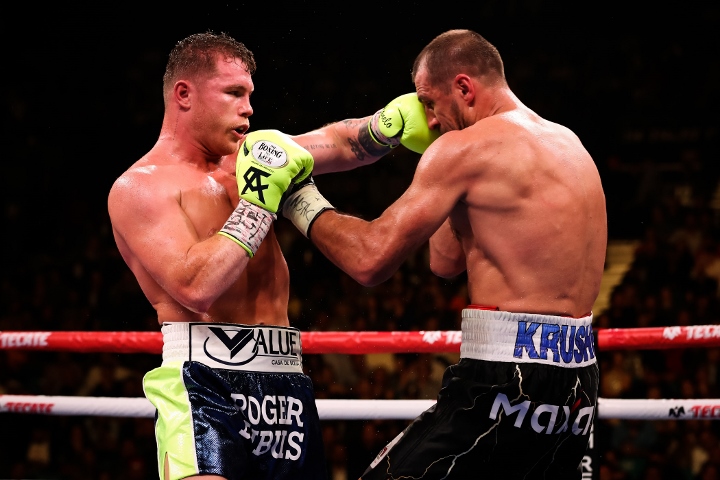 As Kovalev tired in the second half, Canelo picked up the pace and began to apply more pressure. In the eleventh round, a combination knocked Kovalev out against the ropes.

“It was a difficult fight, Kovalev was carrying us a few more pounds than us, he is used to that weight and we are not, we really fought very cautiously, we needed to throw a little more punches, but in the end we found the plan to break down [Kovalev] little by little," Reynoso said to ESPN Deportes.

"I think Saul was dominating the fight, imposing his style, doing nothing more than he needed to do to throw punches. I was ordering him to throw one or two punches in the combinations, he was cautious, but he knew how to finish."

The end was brutal, with Canelo and his handlers getting very nervous as Kovalev appeared barely conscious as he was laying against the ropes.

"First of all we very happy because we won, but we also got nervous because we do not want the outcome to be like that [where the opponent might be injured bad], but we won. I am happy for what Saul has done in his career and proud more than anything of him," Kovalev said.

Kovalev was visibly gassed out by round 6. When you're that exhausted, your muscles get flaccid, reflexes slow down, and you can't stiffen up to absorb a blow. I really thought Kovalev would have have been in better physical form…

[QUOTE=KillaMane26;20168169]For some odd reason the Krusher fought even more cautiously[/QUOTE] Its very obvious its a fixed fight. Canelo is not even the same as Yarde.

[QUOTE=mjh1969;20168285]Maybe he was watching a different fight. Thats not the fight that I saw. No way was Canelo dominating that fight.[/QUOTE] Yeah I don't even really consider myself a Canelo hater at all...I was impressed that he went up 2…

[QUOTE=Boxing1013;20168149]Bro how can you say Canelo was dominating the fight lol...maybe something got lost in translation[/QUOTE] Maybe he was watching a different fight. Thats not the fight that I saw. No way was Canelo dominating that fight.

Kovalev has no punch resistance left and it wouldn’t surprise me if he got rocked or dropped in sparring. Even pacquiao wasn’t this gun shy after Marquez rocked his world. Eleider broke what was left of the Krusher, he’s now…