Canelo's Trainer Hits Back at Claims That Kovalev Fight Was Fixed

Eddy Reynoso, head trainer of Mexican superstar Saul "Canelo" Alvarez has hit back at the recent claims that his boxer's big win over Sergey Kovalev was a "fix."

Earlier this month at the MGM Grand in Las Vegas, Canelo moved up by two weight divisions to captured the WBO light heavyweight title with an eleventh round knockout of Kovalev.

A video has since surfaced on social media, where Kovalev made several controversial statements bout he loss to Canelo. 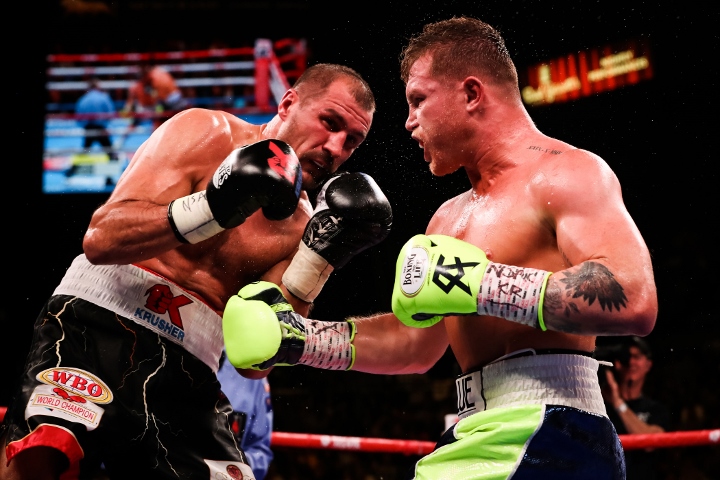 In the video, Kovalev claimed that at 36-years-old he was physically exhausted after back to back training camps that were too close to each other. Kovalev had a grueling win over Anthony Yarde on August 24th, and it didn't take long before he returned to training camp to prepare for Canelo on November 2.

Because of those factors Kovalev admitted that he had doubts about his ability to win the fight, but he went forward with the bout because it presented a very lucrative payday. Kovalev reportedly earned a $12 million guarantee.

Due to Kovalev's statements, rumors have begun to run wild - with allegations that Canelo's handlers paid Kovalev to take a dive or that Kovalev had little to no motivation to actual win the contest.

Reynoso is not taking these allegations lightly.

"First of all, I want to clarify, as a coach and manager of Saul, that we do not dehydrate anyone or fix or buy fights or opponents. We have always adapted to the terms of the opponents and even with (Floyd) Mayweather we accepted his agreed upon weight of 152 pounds," Reynoso told ESPN Deportes.

"It seems that there are dark intentions to discredit our fighter and more than anything, try to minimize his achievements. As true fans and as Mexicans, we should be proud that at this time the best fighter is Mexican."

[QUOTE=Squ□redCircle34;20209255]Floyd Liston Lamotta Ray Leonard Joe Calzaghe If you want me to explain I will but there’s that! When your that good , people question your capabilities and start saying you cherry picking, are in fixed fights, judges are on…

Canelo is a very talented fighter and while Kovalev is past his best there should be some credit due. Its unfortunate though that Canelo will most likely avoid the lineal LHW and SMW champions. He has talent just needs to…

[QUOTE=garfios;20205505]Mention 5 great ones of the past 50 years with that kind of stigma. Please.[/QUOTE] Floyd Liston Lamotta Ray Leonard Joe Calzaghe If you want me to explain I will but there’s that! When your that good , people question…

[QUOTE=Johnny_Roa;20208389]It was that way on Caliente.com, its a hotspot for bets. Back then at least.[/QUOTE] If u found those odds and pulled the trigger on it, I think that’s awesome. I was surprised one book had Canelo -252 vs Kovalev.…

[QUOTE=Blond Beast;20206913]Where did u get those odds? The books had Canelo favourited around -225. The articles are still online. If u got those odds that’s amazing, but I just don’t understand.[/QUOTE] It was that way on Caliente.com, its a hotspot…